Passport to Here and There: Grace Nichols, Bloodaxe 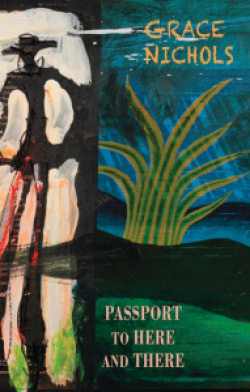 Grace Nichols was born in Guyana and has lived in Britain since 1977. Her first collection, I is a Long Memoried Woman (1983) won the Commonwealth Poetry Prize. Since then she has had four collections published by Virago and four more poetry collections published by Bloodaxe. This  one comes with a Poetry Book Society special commendation. She lives in Sussex with the poet John Agard and their family.

In her helpful preface, Nichols tells us that "one of the things we do as poets, is to try to preserve experiences, people, places important to us, in an effort to save them from time’s erasure". In the current volume she does more than that,for this is not just a personal journey, it is also one that is bound up with politics and history, a concern for the environment and recent events that have dominated the media. Throughout the collection we also get a sense of the passage of time that ultimately affects us all.

The 54 poems in this book are divided into four roughly equal sections that move back and forth between Britain and Guyana. The first section, ‘Rites of Passage’, charts Nichols’ childhood in the ‘Land of Many Waters’. The poems in this section comprise affectionate family portraits garnered through specific memories of moments spent with one or other of her parents and siblings. This short poem, ‘Against the Tradewinds’ is a good example of one of those moments captured so well in just a few short lines:

Sitting sideways on the crossbar

of my father’s Raleigh bicycle –

Me, in sulky pubescent silence –

offended by the implications

A seminal poem in the second section, where the focus of attention moves to Britain, tells the story of Howard Grey’s photographs of West Indians, members of the Windrush generation, who arrived at Waterloo station in 1962. When he tried to develop the photographs, not a single picture emerged, just darkness. Remarkably, nearly sixty years later, using enhanced digital scanners, the photographs “flowered into the vivid present”. There must be a parable, if not a poem, in this story that says so much about the truth that has now come to light.

For me, the heart of this book lies in the 14 sonnets (interesting number) about Georgetown entitled ‘Back-Homing: Georgetown Snapshot Sonnets’. In these pieces we catch a real sense of expectation and excitement, nostalgia and joy experienced by Nichols as she revisits the familiar places of childhood years. It starts with the first poem in the sequence, ‘Landing’:

Homing in to my first-time landing at Ogle,

nothing can stop my Demerara-smile

waxing wide as that sweetening estuary-

Not even the immigration officer,

who flicking through my British passport,

grants me exactly the fourteen days of stay

I’d asked for, in the country of my birth.

The reunion is “the green beginning of the Amazon, / that pregnant foresty air of earth and rain” that rushes up to meet her. Through these lines we see the white wooden houses of Georgetown with their "Demerara windows", dive into "the cool ambience of the Georgetown Museum", walk among the stalls of Bourda market where the exotic produce is "singing the earth’s abundance", sit in a"‘rocking minibus" shoulder to shoulder with the passengers and glance down the "flame-petaled avenues" of the "Garden City of the Caribbean". In all of these encounters she contemplates the fleeting passage of time. Not everything is rosy though. In ‘Like an Heiress’ … "drawn to the light of her / eye-catching jewels’" Nichols is drawn once more to the Atlantic where she registers concern for the environment and the fate of our planet:

… the beach is deserted except for a lone

wave of rubbish against the old seawall –

rightly tossed back by an ocean’s moodswings.

In the latter part of the book there are poems addressed to other writers and artists, in particular, the late Guyanese poet and political activist, Martin Carter; the Guyana-born British artist Frank Bowling and the Guyanese-born artist Victor Davson, who now lives in the US. There is an elegy for Derek Walcott and a poem written as an acrostic for the poet Imtiaz Dharkar and her late husband, Simon Powell. The final section also includes poems that reference specific events such as the Grenfell tower disaster and the fatal shooting of the young Brazilian, Jean Charles de Menezes, who was mistaken for a terrorist at Stockwell tube station in London.

There is much to admire in this collection which charts so well the two different cultures that have helped to shape Nichols and her writing over the years. Fully recommended.

Grace Nichols, Passport to Here and There, Bloodaxe, £9.95