Fighting for breath, bats, and a tomato sandwich: poet's near-death experience on a Covid-19 ward 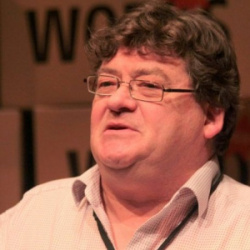 The award-winning poet John Burnside has told about his time being close to death on a Covid-19 ward, having hallucinations about bats, and the joy of eating a tomato sandwich as he began to recover.

“In fact, I had considered calling my GP, but that would have led straight to A&E and, as everybody knows, more people get sick in hospital than they would have done had they stayed at home. Besides, what could a hospital do for me? There was no vaccine, and no treatment other than rest and rehydration. If things got significantly worse, I told myself, I could call the hotline. In the meantime, the idea of self-isolation felt not only appropriate, but also, in a perverse way, aesthetically pleasing …

“Luckily, my wife disagreed. Breaking into my ‘quarantine’, she found a grey-faced spectre, gasping for every breath, and in a thoroughly confused state. (I was told later that the build-up of carbon dioxide in my blood was the reason, not only for my bat hallucinations, but also for the sequence of bad decisions that had brought me to this point.) I can be pig-headed, especially in adversity, and for a while she had tried to see my point of view. Now, however, as I drifted ever further from reality, she picked up the phone.

“Within an hour, the ambulance had brought me to A&E and, because I was in such a bad way, I was quickly whisked into the ‘Red Zone’, which is to say, to the Covid-19 side of the building. From here on in, there was no going back.

“My family had been nagging me for years about my weight, but I refused to acknowledge it was a problem, right up until that definitive moment, when three nurses rolled me from the gurney on to a bed and I saw myself, from the outside, as a damp, larval mass; a fat, overblown grub. That came as a shock, though it shouldn’t have done. I had ‘let myself go’ over the years, my time divided between my desk and various forms of transport, my diet an ad hoc, pro tem mix of cheese sandwiches, stale vol-au-vents and official dinners.

“There was no exit; or not, at least, anything that could be seen from where I was lying, no longer a larval mass, just an overweight, utterly extenuated human male in late middle age. Of course, I couldn’t see the entire room because, like Gulliver in Lilliput, I was pinned down by an elaborate system of tubes and wiring … For the time being, however, I was alone and the sealed room was quiet.

“There is no time in the Red Zone, so I am only guessing when I assume that it must have been around then that the doctor telephoned my wife, to say that the problem wasn’t Covid-19 at all, but a huge heart failure, combined with a severe lung infection. He solicited her agreement that, if I continued on my present path, they would not attempt CPR or put me on a ventilator. (Apparently, my particular combination of co-morbidities – which is to say, the simultaneous presence of two or more potentially fatal conditions in the same patient – meant that such measures would only prolong the misery.) This she reluctantly did. Not surprisingly, she had more questions to ask, but the person who had called had no ready answers, other than to advise her to ‘prepare for the worst’. For the moment, they would keep me on oxygen – but if I didn’t start breathing independently, I would die.

'I felt an odd detachment,

a sense of peace'

“I only learned all this later, after I had made it through the first stage of recovery. For now, though, I was on the other side of sleep, in what Dylan Thomas calls ‘the close and holy darkness’. I have no memory of those lost hours; what I do recall is that, when I emerged, I felt an odd detachment, a sense of peace that I wouldn’t even have tried to explain. I want to say that this was by no means a religious, or even a “spiritual” experience; on the contrary, it was altogether this-worldly. Earthly. Natural. A perfect instance, in fact, of ‘blossomiest blossom’.

“To fans of television drama, that reference may be familiar. It comes from an interview the screenwriter Dennis Potter gave in 1994, three months before he died of pancreatic cancer. ‘The only thing you know for sure,’ he said, ‘is the present tense, and that nowness becomes so vivid that, almost in a perverse sort of way, I’m almost serene. You know, I can celebrate life.’ By that stage, he was close to death, his pain muted with morphine, but he appeared to be as clear-headed as ever. He continued: ‘Below my window in Ross … the blossom is out in full now … It’s a plum tree, it looks like apple blossom but it’s white, and looking at it … I see it is the whitest, frothiest, blossomiest blossom that there ever could be, and I can see it. Things are both more trivial than they ever were, and more important than they ever were, and the difference between the trivial and the important doesn’t seem to matter. But the nowness of everything is absolutely wondrous.

“Writing this now, I am painfully aware that it is all entirely theoretical, an obvious and fairly cack-handed attempt to give voice to that ‘whereof one cannot speak’. Yet what mattered, at that moment in the hospital, when I returned, Lazarus-like, from the far side of sleep, was the feeling I had – a kind of detachment, yes, but a detachment tempered with a real sense of wonder and the impulse, as Potter puts it, to celebrate life.

“I don’t know how long I lay there alone, maybe minutes, maybe longer. During that time, I became aware that somebody had been to tidy me up: where the sheets had been rucked and damp with sweat before, the smooth, freshly laundered bed covers now confined me perfectly; it also seemed that my face had been washed or, at the very least, lightly swabbed with some sweet-scented lotion or soap. For a moment, I was confused: had this been done as part of some formal ritual, because I was dying, or was it related in some way to Covid-19?

“I suppose every return from great injury or mortal terror contains a spell – an hour, a day, a long moment – when some hitherto banal event becomes highly poignant, a landmark in the heart’s geography. There is no way to explain why this ordinary event seems to hold some improbable yet oddly inevitable meaning, all we can do is grasp it when it comes, like Ariadne’s thread, and hope it leads us back to the known world, a little wiser, a little lighter, a little more appreciative of everyday blessings than before. Humbler, it should go without saying.

'What led my back was a tomato sandwich on white bread,

and a cup of very weak, very milky tea'

“In this case, what led me back was a tomato sandwich on white bread, and a cup of very weak, very milky tea. It’s hardly a poetic image, yet there was something about its very banality that delighted me. To begin with, I was fairly sceptical about the whole process – could I actually eat this? Would I ever be able to eat food again? After some hesitation, however, and with a little help from the nurse, I managed to consume this – what? lunch? dinner? I had no idea what time, or even what day it was. But nothing I have ever eaten has tasted so wonderful. As long as I have breath, I will treat every tomato sandwich that life offers me with nothing less than the fullest sense of blossomiest blossom.

“It was the taste of that sandwich, which I ate very slowly, and with considerable relish, that convinced me that I wasn’t going to die quite yet. The next several days were, by turns, wonderfully solitary and strangely convivial; the nurses and doctors who came and went were clearly surprised (and, apparently, rather pleased) that I had come through more or less intact. (As one nurse observed, when I thanked him for some kindness, there was no need for thanks, he was just happy to see me getting better – and I was reminded that, for these people, at this time of ‘excess deaths’, even a partial success story must have been a kind of blessing.)

“I have to admit, I held these people in real and rather sentimental awe. Like many of those who have stood at their front doors every week to applaud our NHS ‘heroes’, I wanted to thank every nurse and porter and auxiliary I encountered for their unstinting kindness and professionalism but, all too obviously, this is not what is needed. What is needed is fair pay and decent working conditions, not virtual haloes and angels’ wings. If one thing comes out of this pandemic, it should be justice for all those essential workers who keep the world not only running, but more merciful than it would be otherwise. My brush with mortality might have chastened me, but this was significantly less humbling than the care I was given by everyone from the paramedics who got me to A&E on time, to the exhausted junior doctors who seemed never to leave the wards, to the nurses who, quite literally, kept me breathing.

“Today, I am still breathing, and with the right medication and support, I may continue to do so for some time. But I remember all too vividly the sensation of not being able to breathe. That sensation is as close as I have ever come to existential panic. I cannot begin to imagine what George Floyd suffered, in those eight-plus minutes, when he was killed by asphyxiation at the hands of the police. But I at least have a better understanding of what it means to gasp out the words: Please. I can’t breathe.

“Six days after I was supposed to die, I went home – and though I had only been gone a week, everything had changed. Suddenly, in the yards and gardens that lined the road, it was summer; the street trees were leafing up, and here and there on the new estates a Japanese cherry, or a flowering almond, stood resplendent in its own tight plot of emerald lawn. One in particular caught my eye, a blowsy, spreading Shirofugen cherry that immediately brought Potter’s blossomiest blossom remark to mind. I had driven this road a thousand times, but it had never looked so beautiful.”

John Burnside was born in Dunfermline, and grew up in Corby, Northamptonshire, where his father moved for work. He worked for many years as a computer analyst and software engineer, but became a freelance writer in 1996, the same year he returned to live in Fife. A former writer-in-residence at the University of Dundee, he now teaches at the University of St Andrews. In 2000 his collection The Asylum Dance won the Whitbread poetry award.  In 2012, his collection Black Cat Bone won both the T S Eliot and Forward prizes.

You can read the full New Statesman article here

A fascinating recall of what it feels like to suffer from the effects of
more than one illness; a personal return to health set out for our enlightenment.
A small caveat about George Floyd. A check of the PM result may
be worth a look online.