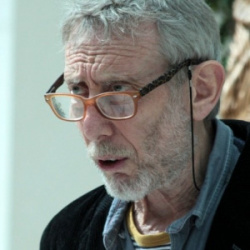 The poet and writer Michael Rosen has returned to Twitter, almost three months after being taken to hospital with suspected Covid-19 and spending many weeks in intensive care.

Rosen, aged 74, who is still in a rehabilitation hospital and now undergoing physio, paid tribute to his wife Emma-Louise Williams and said: “Emma and family have been on the frontline in this, taking the strain, supporting, fielding the worry, chasing up on things. It’s a huge load to bear and to keep going. They’re number one.”

Rosen also said he had been helped by the many message of support by well-wishers on Twitter, who deluged him with more messages after his latest tweet.

In another tweet later in the day he said: "From the moment I was spotted as having the virus to where I am so far must have pulled in the work and skills of over a hundred people working long hours. The NHS was and is a great leap of the human imagination designed to help us all. Forever grateful and believing in it."

In a further tweet early on Sunday morning, he added a word of advice to other patients: "If you’re going into hospital, take soap. Austerity doesn’t do soap."

'The music lived in his head, the tip of his tongue' ►