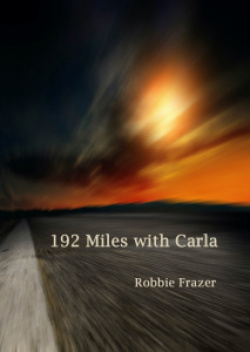 An intriguing poetic journey is delineated in 192 Miles with Carla, the debut pamphlet by Robbie Frazer. The 18 poems are unique and diverse and never banal in their imageries and structures. Skilful use of repetition dictates the rhythm of the poems, and apparently casual rhymes convey irony, with well-crafted alliterations. Free verse is preferred but the form of the ballad is also masterfully explored. Musicality is realised in an apparently spontaneous way and it conveys the sense that it is worth living life as it is without having particular expectations or set plans.

His encounter with Carla, who keeps her penis in a jar and is heading north-west to throw it from the Golden Gate bridge, is on the highway. Her presence is strong on the page as she travels towards an unknown yet interesting future. In this journey, landscapes are impressions; they are recorded, as in a film, in words that repeat themselves:

On my left are grids on grids on the bones

Some green, some brown, some fly-blown,

This technique of including lists and repetition is used in other poems too, such as ‘The Slow Collapse of Rain’ and ‘The Flower-eating Girl’, in which sounds become paramount. Relationships are present as well in an understated, apparently ordinary, way:

Now. In the silent space where thoughts

are left to fall and settle in quiet piles

and words sit mute, unclaimed. Here is where

I meet you. Here is where we are. Here it is.

(‘And the Three Days that Followed’)

The approach is casual but intense, and deeply lived in the moment, without any particular plan or expectation. This is what we are and “where we are”. There is nothing more to add, no futile chatting.

How to relate to people and to monsters is interestingly explored in ‘Meeting a Monster in Anglesey’:

Then, bang! The drops scatter,

I heave back and meet him;

from 100 yards into his black he meets me.

This is a private union, quiet, unnoticed, without witness.

The poet and the monster fight, evoking myths and legends of the past such as St George and the dragon, Jonah being swallowed by the whale, and Jacob wrestling with the angel. But there is no real competition or winner this time. At the end of the poem, the poet walks the monster “head first to the sea”. The beast “hesitates then slips off without a word./Doesn’t even look back”. The encounter with the frightful ‘other’ is then reversed, questioned and undermined.  The monster just wants to be freed; there is no need to fight, no need for sacrifice. “All right”, says the poet, “All right, alright”.

Women figures are present in two compelling poems. Chrissie, the liberated woman who knows her way, is skilful in her use of language and does not need men’s protection. She wants more than the traditional roles imposed on women:

This is me, I know my path, my wings are all unfurled.

I’m flying high above the place that used to be my world.

It’s just the same except I see instead of gilded cages,

a sea of thoughts I’ll never cross; the vessels of the sages.

The flower-eating girl in the last poem is evoked in an imaginary atmosphere, an enchanting dream, or nightmare, where the vegetable garden is the place of the encounter and is surreally transformed:

slapped by light. Her hair is clamped wool weighted down

with jewels of earth. She wears a necklace of seven blue tits hides

strung by the neck. I notice petal jasmine, five or so,

circling her mouth – a milkshake moustache. Her eyes,

Similarly to an animal, she snacks on the poet’s vegetables and flowers and even steals cheese from his plate on one occasion. It is a relationship that gives and takes while the ‘girl’ grows up and the poet grows old. The poem is a significant conclusion to a series of riveting pieces that convey in a singular way the joy of life and its unpredictable turns.

'My dead father’s Brooks Brothers wingtips, heels worn down from running between women' ►