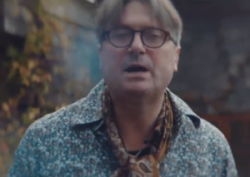 Simon Armitage has found a place for “some little bits of writing that I really didn’t have a home for” – by turning them into lyrics performed by a band called LYR (Land Yacht Regatta) who will be releasing their debut album, Call in the Crash team, on 26 June.The band features the poet laureate with musicians Patrick Pearson and Richard Walters. The words for all the tracks are written by Armitage from the perspective of a fictional character dealing with different moments of crisis.

The origins of LYR stretch back to 2009 when Walters, a big fan of Armitage's work since his schooldays, approached the poet's publisher about the possibility of collaboration and set Armitage's poetry to music in his 2011 solo song Redwoods. "Simon and I talked about the next step, he said. "Instead of just taking words and me singing them, we had the idea of a spoken word project that had a bit more of a life around it in terms of the musical setting.”

In this video Simon Armitage talks about the music and how he came to be involved.

This is not the first time the poet laureate has dabbled in music. In his 2008 book Gig, he wrote about trying to start a rock band in his forties. He formed a band called The Scaremongers, that released an album in 2009, before disappearing from trace.

In a wide-ranging interview with the Financial Times, published last month, Armitage said he chose the LYR band name, but added: “I don’t know if I’m the frontman of this band. I haven’t worked out where I’m going to stand on stage.”

The FT article says that the project’s origins lie in Walters’ admiration for Armitage’s poems, which he first encountered at school. “For me at the time, really enamoured with Jarvis Cocker and that very British style of song lyrics, I saw the humour in it,” he says. “That was a turning point for me in my love of poetry.”

In the article Armitage reveals that his daughter Emmeline is a slam poet who grew up listening to rap. “That’s the music that was coming through the bedroom wall,” he said.