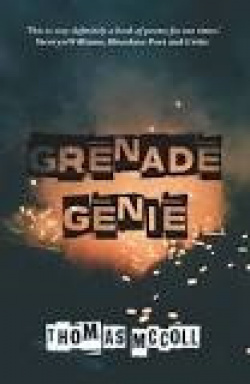 Thomas McColl is engaging to meet, a quality that fully comes across in this collection of 25 poems that is deeply sceptical about the internet, kicks against the pricks of bureaucracy, and is laced with surrealism, mild anarchism, satire, and self-deprecating humour.

A sense of insecurity dogs his dreams. The tone is set in the very first poem, when the poet is woken each day on the bus by a tree branch hitting his window, which he likens to a bison’s headbutt (‘No Longer Quite So Sure’). His distrust of the internet - “You’ve made a pact with the digital devil” - is revealed in ‘The Evil Eye’, which he illustrates with the account of an Afghan shepherd who refused to allow a hippy to take his photo in 1971. McColl translates and updates this to a caustic view of social media:

You’ve allowed yourself to get caught in a cobweb

spun by a social spider that sucks you dry of information,

then leaves your hollowed-out exoskeletal frame

In any event, the next day, there’s a brand-new cobweb;

once again you feel the need to be captured.

Other well-argued poems such as ‘Obsolete’ and ‘Said Contents’ deliver similar messages. Of course, the irony is that McColl has – as we all do - used social media energetically to promote this collection.

‘Carry My Eyes’ describes the plight of refuges in the “never-ending fortress” of Europe, but is less sympathetic about the journalists that write about them: “But I know that they don’t care -  / they’ll turn my truth into some kind of lie”.

One of McColl’s strengths is his humour, a commodity that is rarer in poetry than it ought to be. In ‘The Greatest Poem’ he imagines himself overlooking Margate sands and coming up with a worthy successor to TS Eliot’s The Waste Land. But he then fears the opposite may happen, that he will instead produce a four-line Instagram poem that is quickly deemed the worst poem of the 21st century, thus usurping William McGonagall in poetic ineptitude.

You get nearest to McColl’s tolerant, liberal, baffled, annoyed creed in the last stanza of ‘Socialist Workers on Oxford Street’:

In any event, I hate that everyone and everything

is threatened with being submerged

by what appears to be an unstoppable tide of commerce

and all that’s left to confront it now

(He’s not the world’s worst poet by any means, but he might have edited out that second “In any event.”) This poem is followed by threats to take dire revenge on white van men, hippy cyclists, black cab and bus drivers in a ‘Statement by the Pedestrian Liberation Organisation’. ‘The Phoney War’ is a poignant poem about children playing soldiers, who ask their gran for their tea, and find her “quietly sobbing at the stove”, while ‘The Surgery I Go To Has a Two-headed Doctor’ is simply very funny, as is the self-deprecating humour of ‘Nightclubbing in Brum, 1988’ and ‘Jan, Jen or Jean’.

I don’t think that this collection needs four separate sections, as McColl’s tone of genial but determined dissent is consistent throughout. As he insists in the collection’s title poem,

And though nothing matters

when we’re all just matter,

that people who think

they’re more than what they’re made of

are there to be brought down.

McColl’s quirky brand of poetry is often political, but with a smile on its face. That’s a rare and welcome combination.