'Where Did All The People Go?' Carla Mellor's lockdown words for children 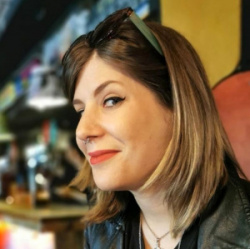 As debate rages about whether it is safe for some primary school pupils to return to school soon, Write Out Loud would like to pay tribute to one poet who has helped to maintain the morale of youngsters during lockdown with her inspirational words.

Carla Mellor’s moving poem ‘‘Where Did All the People Go?’, was turned into a video by Northern Heart Films and shown on CBBC. It includes lines such as “It’s strange how we’re apart, but we’ve never been less alone”, “It’s not quite like half-term, it’s sort of in-between”, and “We’re talking, we’re sharing, we’re caring, we’re listening”.

They’re the kind of sentiments that you’ll never hear at a government press conference, but bring a tear to the most cynical of listeners, including me.

Another video poem, ‘A Kingdom United’, is a powerful and remarkable survey of four nations in lockdown, that pays tribute to key workers and the small acts of community kindness taking place all over the land every day. It includes the NHS staff, of course, and is very much in the spirit of Write Out Loud’s Beyond the Storm poetry competition – we hope Carla doesn’t mind us getting in the plug.

If you feel like despairing, never mind the bombast and bluster of media pundits and politicians – settle down and watch these video poems, and feel better!

Who is Carla Mellor? Well, she’s from Wigan, for a start – a 30-year-old marketing professional who has been working from home during the lockdown. She gained confidence as a poet from appearing at Wigan Write Out Loud open-mic nights, in the footsteps of other big names such as Louise Fazackerley, Joy France and Laura Taylor. She was a support poet at Louise’s recent book launch at the Old Courts in Wigan, just before the lockdown.

Carla said: “I did a few brief stints at Evidently in Manchester, but being new to poetry didn't realise the difference between slams and open mics. I was a nervous wreck and needless to say I came last both times. It set me back a bit until I went to my first open mic at the Old Courts in Wigan. Everyone was so welcoming, there was nothing competitive about it and it was just such a safe and open space to read some words. The Secret Writers Group at the Old Courts has also been a great way to develop. For a small town, Wigan has a lot to offer writers.”

She explained that the CBBC and CBeebies poems “came about after Northern Heart Films made my poem 'A Kingdom United' into a video. It has had over 100,000 views on social media and led to a BBC breakfast interview (from my front room!). CBBC got in touch shortly after saying they wanted a similar video for the nation’s children, exploring how they've been feeling and what they've been up to during lockdown.”

Carla added that she thought lockdown had given many people “more time to explore creative outlets. I'm still working my 9-5 remotely but I've got an extra two hours back in my day now my commute from Wigan to Manchester has been replaced with a commute from one room in the house to another. I also think that writing is a good way of piecing together your thoughts and feelings, it's very therapeutic to get everything that's in your head down on paper - and it's no surprise that we all have a lot of thoughts and feelings at the moment.”

How is she so in tune with children’s feelings? Carla has no children of her own, but said: “I've got six nieces and nephews, from five-17, and I just thought about what they would like. I didn't want it to be patronising either so I just thought about how I'd feel at that age, I guess. Children are just future adults.”

She added that “a lot of my spoken word poems are quite adult in the themes, but I think my language is still quite similar. I always wanted to write for the everyday person and make poetry accessible and not something someone might read or hear and have to look half of it up in a dictionary. Not that I don't like more complex poetry, I do - I just like to write in a way that's conversational, I guess.”

On Friday Carla will be performing online at a Barely Believable Bout of Beautiful Avoidance, as part of WOWFest. You can find out more about Carla at her website here

◄ Litany of a Cardiologist: Denise Bundred, Against The Grain

You can do more than just clap for the NHS – support its staff by entering our Beyond the Storm poetry competition! ►