These are the Hands: ed. by Deborah Alma and Dr Katie Amiel, Fair Acre Press 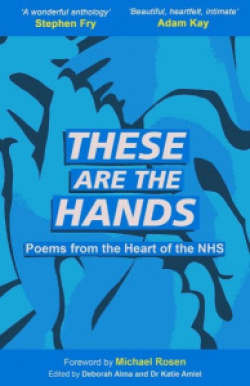 This anthology should be read at some time by all those who stand outside their homes on Thursday evenings clapping in support of NHS workers. Which is a lot of us. It wasn’t planned that way, but this book of more than 200 pages edited by London GP Dr Katie Amiel, and Deborah Alma, the Emergency Poet, with all proceeds going to NHS Charities Together, has been published at a time of health emergency. That makes some of its contents harder to read in our present circumstances, because many of the poems are written by health workers themselves - and they tell it like it is.

There are many incidents, moments of empathy, frustration, anger, tenderness. Spoken word performer and nurse Molly Case records a last moment that reminds us of present, heartbreaking conditions:

One lady, passing, had no relatives to stay.

We sang her to sleep, let angels take her away.

You can also find this poem on YouTube. Another practising poet, and a consultant paediatric intensivist, Colin Begg, talks about Intensive Care:

patients off the scale of care -

and at its centre, a person

trying not to die.

(‘Explaining my night shift to my mother’)

The warmth and spirit of the NHS is captured by cancer specialist nurse and poet Debz Butler as she recalls dancing with a patient – “I’m not Ginger Rogers, but he is Fred Astaire”. Another, ‘Slow Waltz at 2am’, by clinical scientist Caroline Stewart, records a similarly unexpected moment: “He is in striped pyjamas, shaken not pressed”. There is a tribute to the breeziness of a chemo nurse by Keith Chandler, an administrative assistant in medical records: “All morning I hear naughty laughter / billowing out from behind the screens / and think: yes, you are The Real Thing.”

I am paid by the minute. The clock ticks.

Each visit should take half an hour

including travel each spoonful pushed five

seconds each wash six minutes in this

got time for a slow one – hurry up – haven’t got

time to chat or listen to you speak. Or weep.

NHS workers often suffer guilt. Another practising poet, psychiatrist Penny Shutt, tells of failing to suspect that a young mother was suicidal – ‘My First’. The feeling of helplessness is shared by GP David Blane in ‘What more could we have done?’ The vulnerability of NHS staff themselves is touched on in ‘Consultation’ by GP Chris Woods, and ‘Burnt out’ by Emma Halliday, public health research fellow: “When anyone queried / he stiffened the face mask / and was always fine, thanks.”

Denise Bundred is a former consultant paediatric consultant and an award-winning poet, and sees the beauty in open-heart surgery: “The scalpel traces a stroke down your chest, / string of rubies swells from the incision.” After the operation

The surgeon stretches his neck, steps away from the table.

Can someone order me a cheese and pickle sandwich

Before the canteen closes?

I’ll see his parents on the ward in fifteen minutes.

You can’t help but see this guy as the coolest of heroes.

And on the other hand, there’s this. ‘Treating an epidemic with one bottle of pills’, by child and adolescent psychotherapist Charlotte Ansell, lists the ways that the NHS struggles daily to meet the demands placed upon it, even before coronavirus:

The bucket in the corner of the photocopier room,

collecting drips from exposed electric cables in the roof, is full

It’s like bailing out a cruise ship with an eggcup

when the industrial bilge pump fails.

And more than a hundred show up.

The anthology includes poems by leading poets such as Roger McGough, Lemn Sissay, and Wendy Cope, and is introduced by Michael Rosen, and his beloved ‘These are the Hands’, written to celebrate the 60th anniversary of the NHS. Worryingly, Michel Rosen himself remains "very poorly" in hospital at the time of writing.

His poem is followed by one by Margaret Adkins, a student nurse in 1979, about how she and another student prepared the body of their first deceased patient:

in his locker. The handmade Get-Well card for Grandad

we saved in a plastic bag marked, Belongings.

The last section of the anthology is also about death. The poems are generally moving, gentle and loving. The poet Julia Darling, who died of cancer aged 48, speaks tenderly of ‘My Old Friend Hospital’:  “Whoever would have thought / I might love a hospital, but I do; / you know me now, and I know you.”

A number of the poems are lengthy; they are often complicated stories and emotions that need to be set out in full. And sometimes the poems are so painful that you can only read a few pages at a time. You don’t know where to look. One of the endorsements on the back of this remarkable book is by the poet laureate Simon Armitage, who says that every waiting room should have a copy. I’m not sure I’d want to be reading this book, which has already raised thousands of pounds for the NHS, while awaiting an appointment and feeling anxiety and apprehension, to be honest. So I would say instead, that every home should have one: this testament to what it’s really like on that front-line.

These are the Hands: Poems from the Heart of the NHS, edited by Deborah Alma and Dr Katie Amiel, Fair Acre Press, £9.99