Competition closes in 13 days, 20 hours. Get details and Enter.

Tradwives. A Mashup of Traditional Wives 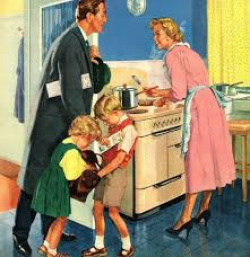 Tradwives. A Mashup of Traditional Wives

(Adapted from a newspaper article)

And have dinner on the table at 6.30 for their husbands

They want to don aprons

And be the only ones

Who get to scrub the toilet

The dream of hoovering in heels

Putting on a pretty pinafore

Putting their husbands and children first

To elegantly blow their nose

They call themselves 'tradwives'

Or those on maternity leave

Or those because it's cheaper than childcare

UK Alena is the made-up face of the movement

Women had bugger all options for contraception

They were allowed to get raped

(More hidden than it is today)

And it was much trickier getting a divorce

Yet these women are putting on

And wishing they could go back

Well said MC. not a topic to make light of as my original post said in no uncertain terms until I changed it, fearing Don might think it was aimed at him.

I am an old fashioned guy with strong views about some things.

My Mother worked extremely hard during the war, and impressed upon me the way to treat and respect women. She gave up work once the war was over and became a devoted wife, mother and my constant source of love, guidance, and support to the whole family.

Things have certainly changed... as times do... not always for the best.

There really is no right or wrong way... In fact I echo one of my childhood roll models Bruce Lee "No way is the way"

I can offer a view from the perspective of a WW2 baby whose
mother was hardly "subservient" to anyone ! But we should also
recognise that the time-honoured position of women - and NOT
primarily in western countries - was their role as homemakers,
mothers and supporters/comforters to both husband and offspring...
beyond value in terms of social reference despite the strident metoo
utterances today. Behind many successful men is a happy woman.
And happiness is more likely if the essential nature of either sex
is properly understood: woman to nurture and men to provide the
source and the reasons. The exceptions have always been around
and can be found down the centuries of human existence.

When we see more than three frogs we think we are having a plague!

The other day four horse riders came past and the bloke next-door
Ran for the hills... Which in Norfolk is a long long way to run.

I have never had a call out... and I am the only member.

Mind you..... thinking about it, it was April Fools day when I answered the ad.

You don't think that someone was wi...Doh!

Oh to live in Sleepy Hollow
Away from all the rush
With running brook and croaking frogs
And all is quiet, hush

shutup.... you're disturbing the quiet

The really funny thing is Don we do leave our doors unlocked here... The hardware store leaves a huge amount of stock outside 24/7 on their car park. My friends who come to visit are stunned when they see what this small town is like.

I will send you a photograph later to show you.

If we have more than two cars in a row it is either rush hour or a traffic jam.

My how times have changed... apart from here in 'Sleepy Hollow'
Thank God

Bit naive thinking we can go back to leaving our doors unlocked?...

"Sexism functions as the gateway drug to white supremacy: men bonding over misogyny and rallying for the white race"

This romanticized view of a mythical past is the radical right’s coded language on demographic panics which references a time when the country did not have so many immigrants or foreigners or people of colour.

“We can have that again, things are changing so fast. We don’t even know the identity of our own country any more.”

The use of “1959” is also oddly specific but nevertheless measured as it nested in the post-war period that was still unharmed by the revolutionary 60s and 70s.

Born a child of the sixties I must agree with the last sentence.

I detest any and all forms of ism's

The original piece you made reference to "UK Alena is the made-up face of the movement..."

Both of you stop quarreling!!! Cool down.😱

The 'whoever' who wrote this is me...is that who you're referring to?

God knows what whoever wrote this is thinking!

I kinda like this trad bit than the mod one. To each it's own. This is another great piece Donny dear.💋