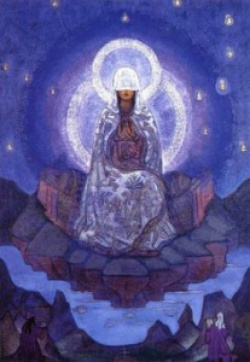 The authorities received knowledge they needed to create humanity. Sophia Zoe, who is with Sabaoth, anticipated them. She laughed at their decision, because they are blind, and they created humanity in ignorance and against their own interests. They did not know what they were doing
-    On The Origin of the World
Nag Hammadi

She says she comes from the chaos
of air to light the earth
bring true joy in bright thought
to rule above
the dark aeons of disorder.

Clothed in possibility she sings
without voice, without time,
independent of eternity yet permanent;
a rite of forever unthinkable
to our capped zodiacal brains.

Sophia re-descends. Through clouds
she falls perceptible only
to those who glimpse that age
by way of tricks or trauma
and stumble
upon great secrets like crushed leaves
deathless in their changes
shadows half material
in cold grikes of light.

Sophia came us, her passion manifested
as every love you’ve ever had,
every pain you learned from,
for knowledge hides in monsters
and saints alike, but
her complex cosmos became corrupted
by starless barbarians, seven and two,
as round the fires they preache
peace between scoffs of
human flesh,
the occult technology
of will prevails as we become
that place within warm aethyr in which all other
realms compare themselves when they look up
to teach
uncreated beings of a place
where death is not a passage
but a door long-hidden among the cliffs
of ridicule.

Sophia is there now, waiting for those souls
who sacrifice who they are
to assimilate non-being,
to offer up the laughable matter
of our physical bodies
for a chance to discard, finally, the dream we have been told to believe
is life.

Thank you for this valid explanation. I might do well to employ this in my own poetry. Creativity and inspiration are ethereal, difficult to pin down but can produce untold wealth when it comes to igniting the mind with ideas.

Thanks a million Keith, the older I get the more I try to clarify the message but most of the time I'm at the whim of whatever energy manifests in creativity.
But I'm with Brahms when he said creativity comes from something outside ourselves. The hammer doesn't fix the nail, it's the force that drives the hammer that's responsible
I'm hoping it's all going in sub-consciously 😁 thanks again bud

I enjoy nearly all your poems and this is no exception but they can also be very abstruse in their content. They require insight and some study which is a good thing. I do so enjoy, "where death is not a passage but a door long-hidden among the cliffs of ridicule". I would gather that you draw a lot of your material from what you read thus bringing the reader to some consternation. Your ability to write good poetry is quite evident and this like most of the others is well crafted.