The unpurged imagery of day

Turks threatening Greeks with invasion,
Extermination. Erdoğan, the bastard Sultan,
Is nothing new. Listen to the story of the defeat
Of the west. The King of the moon came looking for us
With blood dripping from his mouth
And a wide toothy smile, as wide as the Bosphorous.
Aristomenos -  king of Messenia -  celebrated for his struggle with the Spartans -
In the Second Messenian War of Ancient Man refused to accept defeat
Unlike the Greeks in Anatolia who struggled  for a while to remain Byzantine after 1457
But the Ottomans raped them and murdered them and laughed at them and smoked hashish.
One Greek Abbess, a poet,  asked herself what the Ancient Greeks said about murder
And refrained from vengeance. Uttering such-and-such platitudes in her defence of cowardice.
Her stoic ancestors were ashamed as was her Christian God:
ἐλθάτω ἡ βασιλεία σου, γενηθήτω τὸ θέλημά σου,  ὡς ἐν οὐρανῷ καὶ ἐπὶ γῆς:
She reassured her bridegroom of her purity and truth  and submitted to Islām .
Most of the Greeks trusted this example, and they and their fathers
Became Muslim. They no longer exalted the mysteries of belief.
They no longer respected themselves
They were worse than the Janissaries
Ex-Christian boys from the Balkan provinces
Who were forcibly converted to Islām
Then  drafted into the Ottoman service.
This is how a civilization crumbles. 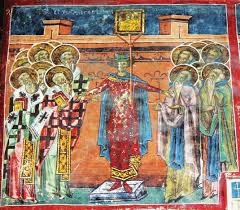