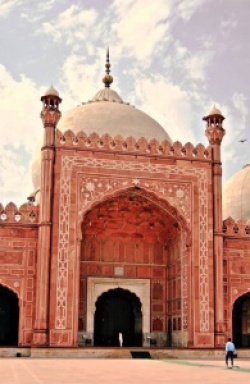 On Good Friday in Mosul,

A piece of pink Heaven on this bloodyearth.

Built by the Mughals to celebrate God

It celebrated the Hindus and the Buddhists,

The Sufi saints who'd moved into the future

Keeping their close hold onto the past.

It celebrated the Christians and the Jews

Who were joined to the Muslims, as brothers,

As the peoples of the book.

Now, instead of scholarship, the Islamic world is defamed

By these devils of savagery, mass graves, beheadings, blasphemy

All the narrow cruelties of  Salafist Wahhabis

Who believe that heaven is only to be found  by those who murder in the name of G-d, between the pages of a closed book.

Come, come, instead and look at the Calat Alhambra

Described by the Moorish poets as a pearl set in emeralds

Built whilst, we, in Northern Europe still laboured to turn a sod.

The Alameda de la Alhambra, so full of wild flowers,

Roses, oranges and myrtles. Filled with the songs

Of nightingales, the music of streams and cascades;

A very heaven built by these majestic Muslim Moors.