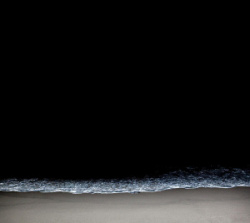 Never before had he known a colour touch him that way,

This indigo held a tenderness and cool warmth which confused him.

As the neon lights dimmed and harsh sounds abated,

He felt drawn to the dark, to go in search of his liberty

Like a dimmed aquamarine siren, it called to and reassured him,

He would be safe, it would hold him in its arms, nothing could, would hurt him.

He knew the risks he took in escaping the midnight noise,

His resolution was a strong as any navy that ever left harbour.

Lost in the depth of the shade, hidden from sight under a sapphire sky,

He still feared not knowing the unknown, his fragility exposed to salty kisses.

He felt as one with the blue, at peace, cleansed of all other tones,

He rolled gently in velveteen independence; a baby returned to the womb.

Below him and along the flanks of his flesh, a phalanx of tints unfurled.

He began to expand, his atoms combining with the cobalt caress, until at last,

His own stardust took flight and took its place amid the heavens.

Thanks for the likes, they are most appreciated

Reflections on one night in Ibiza