Middle of the road poetry? Walking poet Lucy Furlong gets down to the grassroots 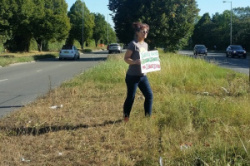 An eco-poet has found a new path to creativity – by writing about the nature to be found on a section of central reservation on a dual carriageway. Lucy Furlong’s chapbook Sward includes a look in great detail at the plants – and rubbish –  in the middle of the A240 Kingston Road, from the Tolworth junction with the A3, to the nearby border between London and Surrey. One of her prose-poems in Sward, titled ‘Skin of the Earth’, begins: “Humans don’t walk here. I see drivers stare at me through windshields and wound down windows as they pass by. One day a woman and a girl to stop to look at me as I kneel to take a photo of red clover.”

She goes on: “People do inhabit the sward – if not for long. There is a tiny path worn across the grass where lads cross over to play football. At the end of May there was human-sized path in the waste-deep grass, where someone had slept by the lime tree.” And she lists the plants to be found on this thin stretch of ground between two speeding lines of traffic – achillea, birds foot trefoil, ragwort, red clover, buttercup, speedwell, mallow, dandelion, daisy, plantain, ragwort, teasel and bristly ox tongue – as well as plastic bottles, cigarette packet and butt, sweet wrapper, crisp packet, and a hub cap.

Lucy describes herself as a writer, poet and “walking artist”. She sees Sward as “a performative series of radical walks, of reclamation and acknowledgment that this strip of grass, trees, and in some places cracked pavement, concrete and detritus, is a 'place' all of its own, important as part of the local distinctiveness of Tolworth, and that it should be valued and recognised as such. And, of course, additionally - it is an important nature corridor, inhabited by small mammals, birds, insects and pollinators, which allows them to find a way from one side of the road to the other, as well as mitigating air pollution.”

She takes some of her inspiration from the Victorian nature writer Richard Jefferies, who lived in the Tolworth area for a number of years, and wrote about it in a book called Nature Near London. She has been involved in a project of walking with up to 40 other people in Richard Jefferies’ footsteps. The walk, which took place on a May bank holiday in 2018, was recorded for a Radio 4 programme. 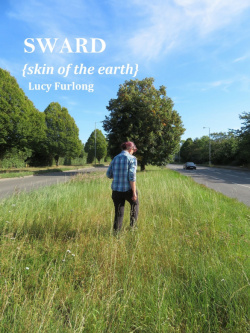 Lucy says on her website that the grassy central reservation has recently been threatened with being concreted over, and could be again: “Last year this slim but vital patch of nature was placed under threat of being concreted over from one end to the other, as the proposed Tolworth Area Plan wished to see this an extension of the Tolworth Greenway – green stripy concrete. This central reservation, which helps pollinators and other fauna find their way across the busy road from one green space to the other (Kingston University playing fields and Tolworth Court Farm fields respectively) must be kept and properly managed. It also does an important job of mitigating air pollution – and providing beauty – something we mustn’t overlook. I was glad that many objections to this part of the plan were received and it has been dropped, but I worry it will happen anyway in increments … although at the moment this does not mean the loss of all the grassy and floriferous ‘sward’ I have been walking up and down for the last six months – and seeing all my life, it still could be in the near future.”

She has also written about the local Hogsmill river, which joins the Thames at Kingston, and at nearby Old Malden was the source of inspiration for the Pre-Raphaelite painting Ophelia by John Millais. The final passage in Sward says: “At the border with Surrey kingfishers fly along the Hogsmill river, a rare chalk stream, little egrets potter about in the shallow water, sometimes there are two. Before you get to the river you can see a kestrel, on top of a lamp post or circling above the moated manor – there was a mediaeval moated manor house across the road from where I am walking here on the central reservation – one day we saw a bird of prey sitting on the pylons that run along the fields here, the greenbelt which exists on both sides of this road. It was a peregrine falcon, the bird of prey on the pylon, come to hunt in Tolworth.”

At this point the writer of this article must declare an interest. I grew up in Tolworth, and remember nothing poetic about the place of my boyhood. However, If I rack my brains I do recall that before the looming 22-floor Tolworth Tower office block was built in the early 1960s, there was a cinema on the site where I saw The Wizard of Oz, and a patch of waste and rather marshy ground behind where traveling circuses occasionally appeared. That patch is now occupied by the tower, an M&S, and a car park.

The tower was a monstrosity when it was built, and still is today, and in my mind set the agenda for Tolworth. But Lucy’s work demonstrates that poetry can be found anywhere, if you know where - and how - to look.

Lucy will be launching Sward at the Poets for the Planet event on Saturday 8 February, as part of the Poem-a-Thon at the Society of Authors to raise money for climate-related causes. Anyone who sponsors Lucy for £5 for reading poems on the day will get a copy of Sward plus a limited edition postcard (only 50 available). As part of the event she is also running two eco-poetry workshops on exploring family memories of and connections to local wild spaces, through walking and writing about them.

Lucy, that is the darndest thing.That road. I walked it as a child up to MacFish every Saturday with my dad where he'd jolly & lark the staff and buy kippers & shellfish & stuff that's not even legal any more. I'd pedal up the cycle lanes, possibly, the earliest cycle lanes in Britain, to school in Kingston. I'd walk up there to the Toby Jug to work as a 12 year old and then to the Toby Jug Blues Club where Fleetwood Mac played every 6 weeks about as close as I'm sitting to this screen.

And then only on Tuesday I learn a bloke called Tim Harrison has written a Tolworth book and he's involved with The cornerHOUSE in Surbiton that's actually in Tolworth and he books the writers' nights. timharrison444@hotmail.com

Now I jolly and lark and have run a performance agency for more years than is possible and there's you in the middle of the Kingston Road ticking off the ticks and collecting the sights & smells & cacophonies.

I just had to stop and say.

That is a glorious ecological tale to tell. Power to your elbows and great good luck with SWARD