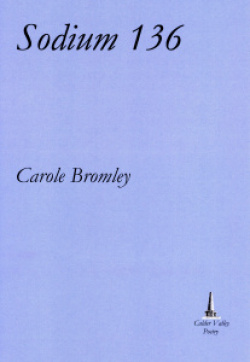 Carole Bromley’s Sodium 136 is her account of being diagnosed and treated for ‘A Benign Cyst Pressing on Optic Nerve’. This is the title of the first poem in this collection, in which we’re thrown straight into the fraught world of the hospital and its patients, many distraught, confused and trying to retain dignity in the face of the traumatic circumstance that has brought them there. Bromley’s first recourse is to literature and poetry. She reads What Maisie Knew by Henry James, losing herself in the book she last read as a student:

I turn the pages with my cannula’d hand,

wander away from Sharon glued to Corrie,

from Jean flipping through Take a Break,

from Joan’s painful voyage to the toilet …

The possibility of her having a stroke and becoming blind as a result of the treatment haunts the first poems and she’s always aware of the mental anguish around her. Patients suffering from dementia and other mental illnesses are in the same ward as patients with more straightforwardly physical conditions. Sleep is impossible: the nurses struggle to keep the ward quiet:

listening to her ravings, their reassurance.

I no longer feel safe. The nurse tells me

She won’t do anything, she can’t even move.

Fear and helplessness attend her decision to treat the cyst. In ‘The Consent Form’ we meet two different personalities among the doctors: the registrar who conscientiously but frighteningly “reminds me of the dangers / scaring me all over again. / Blindness, stroke, death is the gist.”

And the consultant, “so young his baby’s only two weeks old /and so handsome he cuts a dash on the ward round” who helps her to take courage:

I say, what would you advise me

if I was your wife? He says

You could lose your sight. I’d go ahead

I say Give me the pen.

The consultant comes at the last moment to say that operation is delayed, (“I tell him I feel like a dog / thrown one meal a day”) By now the hospital has become a habitat – she can joke with the nurses; they’re named:

Bring me something dry and cold.

to the nicest shower.

We’re with the patient when, the operation completed, she wakes to “the pain, / the way the ward is blurred, / the endless, endless nausea.” But she can see, and now she is invaded by a turmoil of emotions, joy, relief, but also painful awareness of the sufferings, screams and emotions in and around the seven other beds in the vast room to which she’s been moved. There’s a sense of suspended time in ‘High Dependency’, the poem about the immediate aftermath of the operation to remove the cyst. She is conscious of alternating sunshine and night, and the distraught words of the occupants of the other beds.  But the beginning of recovery is signalled: by the time she’s moved back to the ward: ““We are people. The Polish man is Mika, / the screamer Audrey, the old man Barry.”

The recovery progressing, the narrator can recount stories of the other patients, the pigeons that “dance on the rooftop”; she’s aware of the staff and their hierarchy:

I’m like a trusty in a prison now, I’ve been here

so long. I try not to ask for anything

because they will be running every minute

of their thirteen-hour shift and not letting on.

Her focus shifts again, to the way that A&E fills with emergencies at weekends so that scheduled operations are put off: “I lie awake listening to the admissions, / the unfailing patience and kindness of nurses / and I weep.”

And finally, the title of the book is explained, in the penultimate poem. ‘Sodium 136’ is the target sodium level that the narrator’s body must achieve before she can leave hospital. She must endure a final trial: she’s deprived of liquids until this target is achieved. But at last, “SODIUM 142. I’m going home.”

For anyone who has been admitted to an NHS hospital for any length of time, this collection will ring bells of recognition and sympathy. Totally without self-indulgence, with incisive insight, humane observation and self-awareness, Carole Bromley’s narrative takes the reader through the physical and psychological processes that a patient undergoes, from diagnosis to their final release from the hospital’s regime. She makes poetry from the minutiae of hospital life and her empathy with fellow patients and the hospital staff. This is a significant collection that bears witness to the troubles of the NHS and the heroic work of its staff, as well as a personal record of the workings of the psyche in the face of pain, acceptance of necessary suffering and the fear of disability and premature death.