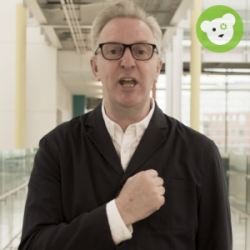 Leading performance poet Tony Walsh has written a poem and made a fundraising video for Royal Manchester Children’s Hospital that has already been viewed over 100,000 times since it was released on 2 January.

Talking about it on Facebook he said the poem – ‘Every Child Counts’ -  had been “months in the making. I was asked to write a poem to celebrate our amazing Royal Manchester Children’s Hospital by the charity which supports its work. It grew to be a wider celebration of our NHS and everyone who works for us there, as well as bearing witness to the thousands of beautiful, powerful, heartwarming and sometimes heartbreaking stories of which the place is made.

“I felt a great sense of responsibility in taking it on, gave it my very best shot and I’ve been moved to tears many times throughout the process and with the reaction it’s had already. There was a standing ovation and a record £400k raised at the dinner at which it was first screened. A further standing ovation when I performed it at Manchester Cathedral at Christmas.

“There was a very moving launch at the hospital two days ago and, most importantly, there’s been a wave of beautiful feedback from staff, volunteers, young patients, their families and from bereaved families; many of whom helped me with my research and ideas, many are also in the film.”

He added: “Do please help the charity if you can and let’s take this as a reminder of why our NHS is worth fighting for.”

Tony Walsh came to national and international prominence in 2017 when he read ‘This is the Place’, his poem about Manchester, at a vigil for victims of the Manchester Arena bombing. It rallied the city and went viral on a global scale.

Walsh himself overcame childhood illness; he was seriously ill with rheumatic fever. The specially commissioned film is to raise money for the Royal Manchester Children’s Hospital charity, which supports the families of the more than 276,000 young patients admitted to the hospital every year.

Meanwhile a line from Tony Walsh's poem 'This is the Place'  was quoted by Sky football commentator Martin Tyler during a match between Manchester United and Manchester City on Tuesday night. Tyler came out with the line - "We make goals that make souls leap from seats in the stands" -  just after Bernardo Silva had put City ahead with a stunning strike in the the first leg  of the Carabao Cup semi-final against United at Old Trafford. He gave Tony due credit, of course.

◄ Love songs of TS Eliot: Emily 'would have killed the poet in me'

hi, I read your article I prefer this such a great kind of post.