What I Heard on the Last Cassette Player in the World: Ben Ray, Indigo Dreams 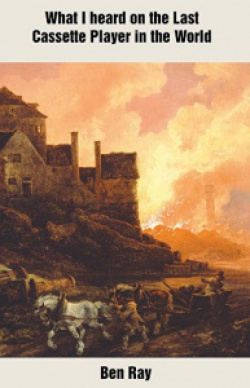 He is a master of the sustained metaphor, as in ‘The day they decimalised the words.’ He plays with the historical event of currency decimalisation in Britain in 1971, showing how cultural change impinges on meaning. With the currency of old words suddenly devalued, the elderly struggle to adjust, are confused and disenfranchised:

The older generation, they didn’t understand –

they cried when they opened their mouths

And even young people feel a “nagging, empty sadness / for everything that had been left unsaid” and the “now-strange symbols” they see when they find old words “tucked in between the leaves of books / or carefully hidden on stained shopping lists.”

Foreign places and past times inspire other poems that deal with change. In a sequence entitled ‘A short guide to Sengoku period Japanese pottery’, Ray follows the violent evolution of Korean pottery into traditional Japanese porcelain design through the enforced abduction of 20,000 Korean craftsmen and artisans by the Japanese, in the Ceramic Wars of 1592 –1598.

This is a very beautiful poem, with the understated grace of an oriental art work. An artisan tells of the violent uprooting of their life in stanzas named for the processes of their craft: ‘Throwing’; ‘Centring; Opening up’; ‘Firing’; Glazing’; ‘The finish’. In the opening stanza of ‘Throwing’, the narrator describes how “When first placed on the wheel of Korea / I was thrown most delicately”: “clay ran like love in my family’s veins.” In ‘Centring’ the war approaches until there are “soldiers/ wading through shards of villages.” The potters’ disturbance in their work is ironically shown:

When you make a bowl

and you are briefly distracted

by, say, a dog in the workshop

or the murder of one’s mother…

And so the story goes on: “Twenty thousand pieces taken from their home / is a rape, a murder.” The Korean craftsmen were taken “in the hope that some of us could be reshaped /and learn to echo the contours of this strange new island.” The assimilation is almost completed, as the pot is fired and glazed: “The longer a pot is dipped in the glaze / the more the colour settles,/melting into grooves now familiar.”

And now, here we are

not quite Kinsugi but nearly there –

the shine on us has set hard …

The narrator keeps his pride as an individual artist, however: the ceramics are now exported globally as traditional Japanese art but the narrator insists: ““I like to think / that they were not born of Korea or of Japan / but of us …”

Welsh places have inspired some of the best poems in the collection. One is another sequence, ‘Monmouthshire and Brecon Canal’. In six segments Ray maps the changing nature of the canal and its banks in engaging detail, from its beginning, “poured out of the Brecon basin / in a feisty swirling shaking liquid rush”,  until in stanza 6: “Like all empires, the canal does not lead to glory / it leads to obscurity and silence and rubble …”

‘The Landsker Line’ plays with “the distinct linguistic and cultural boundary between the Welsh-speaking areas of northern Pembrokeshire and the English-speaking areas of southern Pembrokeshire.” (Ray’s epigraph) This is not about the landscape, but a map of the dialects that remain as traces of historical skirmishes, military and linguistic, between the English and the Welsh cultures:

the next beach north a fighting statement: Pen-y-cwm.

To trace it you will need a phrasebook

and the voice of your grandfather ­ time clots

and cloys in the breaths between sentences.

‘Morning After’ carries a cynical epigraph from Rainer Maria Rilke about the city of Rome. In Ray’s response, the extant remnants of the Roman empire are redrawn as the features of an aged actress, irrelevant to the present day, though still demanding attention:

Time, the great undresser, long ago

got wise to your amphitheatrics

and confiscated your frescoed chic –

Ray’s enjoyment of sounds and mild punning is in the rhyming of “amphitheatrics” with “mosaic rashes” – it works for me in this poem, though not in all.

Not beyond politics and environmental themes, but encompassing them, the narrator’s personal memories leaven the collection: I enjoy ‘Hay Bluff’, a memory of a climb with his father to look down over the river Wye; ‘The Gift’, a memory of his father’s humanity; the bleak “Winter at the Sands Café, Newgale’. In ‘Some Other England’, a memory of Morris dancers (“Morris with a darker touch,/ faces that interchange like birds in flight”) who seem to “solve this internal conflict / and reach into some other England” picks up again the dominant theme in this varied  collection: the fall of empires and how human beings adapt to cultural change.

Ben Ray, What I heard on the Last Cassette Player in the World, Indigo Dreams, £10.25