How Time Is In Fields: Jean Atkin, Indigo Dreams 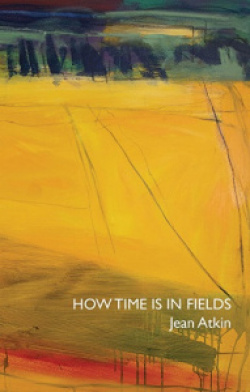 Poet, writer and educator Jean Atkin has worked on a variety of residencies in both England and Scotland and provides workshops and readings to schools, festivals and community organisations. Her poetry has been commissioned for Radio 4, and featured on Best Scottish Poems by the Scottish Poetry Library. In 2018 she became the first Troubadour of the Hills, appointed by Ledbury poetry festival and Malvern Hills Area of Outstanding Natural Beauty. How Time Is In Fields is her second collection of poetry.

Reviewing this collection presented some difficulties because several of Atkin’s poems are hard to pin down. They are examples of asemic writing where non-specificity creates absence of meaning which is left up to the interpretation of the reader. From a visual perspective, the experience is like seeing a colourwash rather than anything that is recognisable or distinct. A few of the poems, in particular, ‘the loudest spring,’ read like incantations whose meaning is obscure. There are other mysteries too. In the title poem it is not clear to me why trees and plants and animals appear in mid-sentence with initial capital letters.

Having said all that, it is obvious that Atkin has a strong sense of landscape. There is a lot of walking, observing and reflection. Time in these poems stretches way back into the past. Were there really wolves on the Stiperstones all those years ago?

Part of the magic in this collection lies in Atkin’s use of dialectal words such as “woolert” (Shropshire dialect for an owl), and vocabulary that has long since been lost to time: “assart and purpresture,” “vert and green-hew” (some of these words date back to the medieval period). Her knack of discovering delightful place names such as Knocknutshell Wood, Brook Vessons, Cuckoo Brook and Dragon’s Hole also adds a certain resonance to her work. Sonic phrases, such as the poem title ‘In yellowhammer weather’ and arresting similes, “swans arranged / like quiet china” and “white hanks of sheepswool / pegged like washing / between drying posts” are her forte. Her descriptions of farm animals are well-observed. ‘How we rode after haymaking,’ and ‘Fiddlers Causeway’ are well-written pieces that resonate in the mind long after they have been read. ‘Jacob McCulloch’s holy barrow’ and ‘The not seen sea’ are also good examples of her work.

The poems move between recognisable locations. Some are set in Shropshire, Worcestershire and Atkin’s native Cumbria, others in places as far apart as Dumfriesshire, the Isle of Lewis and Westray on Orkney. Her work is shot through with history: there are references to the Neolithic age, the Anglo-Saxon months, medieval Forest Charters and King Arthur. The poem ‘A brock geology’ bears some resemblance to the visual spacing of Anglo-Saxon poetry when it was reproduced much later in printed form.

The following extract from ‘Not there, nearly’ is a good poem to end on. These first four stanzas illustrate Atkin’s strengths so well: beautiful phrasing, keen observation and that certain knack of expressing things seen and unseen, the ambivalence that is half-in and half-out of one’s poetic imagination:

This cream blackthorn warm of morning is the hour

to be patching the cattle trailer with squint squares

of corrugated tin and new rivets.

The air is lamb-bleat soft. Away up the lane go

steady hoofbeats, clip of iron to stone, the horse-pace

laid inlayers over the land.

A tawny owl flies in daylight, has the wrong century.

Wings it straight and low and silent to the coppice,

and doesn’t come out.

From a hedge three redstarts tilt at us, tails bright

with rust, backlit by sun, their voices

This intriguing volume of poetry grounded in folklore, rural landscapes, animals and humans and the elusive quality of time itself, is not to be missed. I shall look forward with interest to her next collection.

Jean Atkin, How Time Is In Fields, Indigo Dreams Publishing, £9.99