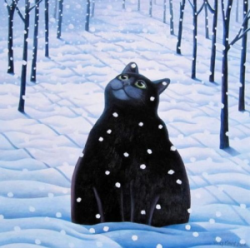 Looking up to see within.

White flakes floating down, carpeting, covering all around.

Snow can cover such a multitude of sins.

Softly he began to hum a song.

He though of his lost love long gone

Over the seas to nonsense land.

There no snow but always winter,

Though they danced on the sands so gaily,

Though they feasted on mince and quince and capercaillie.

When the sun returns with burning heat

And no more the snow to cover, to cover.

Where to look, where to go?

What would all this waiting show?

There was another land he knew,

A wonderland, where it was always Christmas.

Winter when it came was jolly and polite.

And sometimes there was snow when it felt right

But no sin to cover, cover.

A wonderland where Cheshire Cats would grin and grin.

Cool cat began to hum a song and then he began to sing.

Aww this is really sweet, you've given me an idea for a kids Christmas poem now.

Snow, I am a good cat
I got no sins to hide
I not played with no mousies
I not made mousy died

So therefore snow, no need
To cover up, me cat
I sinless, pure, and purr-like
(that's where my rhyme is at)