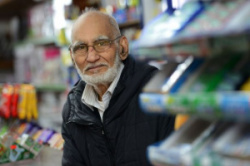 He was shaking  uncontrollably when I walked into his shop,

My thoughts of the beautiful, white Crescent Moon

Were soon lost  in the ebony skies of late November.

He'd seen the glint of the knife on that coal black night;

It was, he said, stutteringly, "the one in the hoodie, with no facial tattoo,

Put the fucking money in there!”

So what did Mr Patel do? In the blink of an eye?

An image flashed: two barrels of a shotgun blast

Coming to England his biggest mistake.

He imagined the robbers tossing his remains into hell

That's all there is to tell.

Except for his daily trembling when the shop bell

And all the other things.

A splash of yellow across a sometime sky ►