AN ACT of TREASON 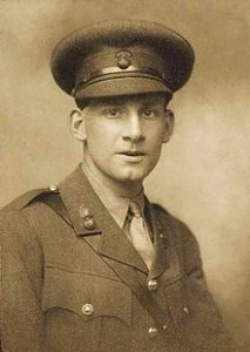 An Anglo-Jewish volunteer - did his patriotic duty

He was one of the First World War’s greatest poets;

A fearless soldier who won the Military Cross for bravery,

For conspicuous gallantry during a raid on the enemy's trenches.

He remained for 1½ hours under rifle and bomb fire

Collecting and bringing in our wounded.

Owing to his courage and determination all the killed and wounded were brought in.

Only he was later sent to a mental hospital

For speaking out bluntly against the war:

This was Craiglockhart War Hospital, near Edinburgh

He sent a letter to his commanding officer entitled:

Finished with the War: A Soldier's Declaration

Sasson's letter was forwarded to the press

And read out in the House of Commons

By a sympathetic member of Parliament.

This is his letter:

"I am making this statement

As an act of wilful defiance of military authority,

Because I believe the war is being deliberately prolonged

By those who have the power to end it.

I am a soldier, convinced that I am acting on behalf of soldiers.

I believe that this war,

Upon which I entered as a war of defence and liberation

Has now become a war of aggression and conquest.

Entered upon this war should have been so clearly stated

As to have made it impossible to change them,

And that, had this been done,

The objects which actuated us would now be attainable by negotiation.

I have seen and endured the suffering of the troops,

For ends which I believe to be evil and unjust.

I am not protesting against the conduct of the war,

But against the political errors and insincerities

For which the fighting men are being sacrificed.

On behalf of those who are suffering now

I make this protest against the deception which is being practised on them;

Which they do not share, and which they have not sufficient imagination to realise."