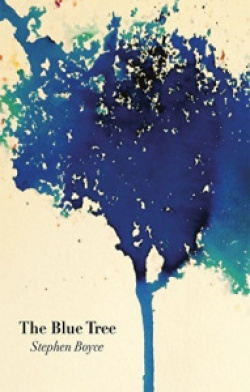 Stephen Boyce is an adviser to heritage and arts bodies, a prize-winning poet and the author of two previous collections, Desire Lines (Arrowhead 2010) and The Sisyphus Dog (Worple 2014) and two poetry pamphlets. He is a founding trustee of Winchester poetry festival and lives in north Dorset.

This collection of 51 poems is divided into three sections of roughly equal length that take in a wide range of subject matter. As well as writing about trees in all their seasons, the many uses of wood and the work of a woodsman, there are references to the weather, geology, birds and archaeology and some poems that offer reflections on war, in particular, the Battle of Loos on the Western Front in 1915 and Burma in 1945. Helpful notes at the back of the book give useful background on subjects as diverse as the saving of Winchester cathedral from risk of collapse during the period 1906-1911, Frank Hurley’s large format glass plate negatives from Shackleton’s ill-fated Imperial Trans-Antarctic Expedition of 1914-17 and kintsugi - the Japanese art of repairing broken crockery.

Stylistically, a number of poems take the form of sonnets although they do not always adhere to the traditional division of 8 lines followed by 6 but utilise varied stanzaic patterns of 4 x 3 +2; 7 x 2; 2 x 6 +2 or one continuous run of 14 lines. There are a couple of prose poems where the print is justified on both the left and right hand sides and there is some experimentation with indented lines of varying lengths.

Boyce is at his best when he is writing about the natural world. Trees often provide the backdrop for his work, enabling him to explore other themes such as war and peace, loss, love and reconciliation. His trees come in various forms: a singleton, self-sown; a wild cherry that bears Housman’s description “loveliest of trees”; Flanders trees felled for duckboards and ammunition boxes; a stand of oak; a windbreak of yellow poplar; trees as waymarkers; a fallen ridgepole; a larch sapling; a holly tree crowned with old man’s beard and, for those who like their trees to be named in Latin, a Magnolia Soulangeana Alba Superba.

In ‘Static’ Boyce reveals the full extent of his observational skills. Even though he writes about objects that are constantly in gentle motion, it is clear that he is a poet who has learned how stillness can be a state of mind:

Perhaps nothing here is still. Whatever appears so

has shifted even before I turn: the mirrored boat

that drifts soundlessly into the canal bank on another’s

whose seed-sheaths split, unfurl, lift off out of sight –

In his short poem ‘The Vessel in Mind,’ quoted in full below, he illustrates the mindset of countless poets who have a tendency to engage with the bigger picture and conjure up multiple layers of vocabulary in a wealth of generosity from what is essentially a simple utterance … it is both comedic and significant in what it has to say and is a real gem:

She said ‘make me a vessel for your love.’

She had in mind a cup made of bone china,

steady, in the slight well of its saucer.

Elsewhere in the book, Boyce writes poems in response to the work of visual artist Sophie Cunningham Dawe, collaborates with the artist Kate Theodore and responds to a light installation, ‘Box 459’ commissioned by Winchester city council to mark the centenary of the outbreak of the first world war.

Trees all over the world, trees much older than ourselves, have lived through these times. Boyce, when he walks through his native woodland, conjures up the memories they hold and gives us some well-crafted, atmospheric poems of quiet beauty and inner strength.

◄ Notes from a small island (3)

Review » Passport to Here and There: Grace Nichols, Bloodaxe