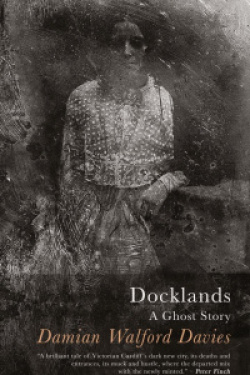 Damian Walford Davies has taught in the Department of English and Creative Writing at Cardiff University since 2013. He is now pro-vice chancellor for the university’s college of arts, humanities, and social sciences. Alongside his three poetry collections with Seren Books (Suit of Lights, 2009; Witch, 2012; and Judas, 2015), he publishes extensively on topics such as the relationship between maps and the imagination, and the work of poet RS.Thomas.

At the end of Docklands he describes how he came to write its poems: “Docklands emerges from a long fascination with buildings, ground, maps and the dead”, it was “a way of helping me to understand and bed down in a new city”.  Personally I relish this small ‘explaining myself’ by the poet, especially after they have held me in thrall over 66 pages.

Docklands comprises 50 poems of eight couplets apiece. It offers a ghost story told by a Cardiff architect who is imagined living and working in the city in the early 1890s. The architect secured a commission:

from Wharf Street to the dun canal -

and raise a perfect square with limes

and fountains playing. It was me

Undertaking this work he begins to sight the ghost of a girl murdered in one of the houses he has watched reduced to “red rubble”, “…The dustcloud/took all day to clear; its tang - /now sweet, now acrid –”.  In his private life, he estranges himself from his wife, she grieving after a stillbirth. Instead he seeks the women selling sex “in shabby rooms in Stuart Street”, who’ll “tackle anything” for oranges.

A collection that tells a single, coherent story is unusual. Yet poetry is well suited to this task, particularly in the case of a ghost story. A form of writing that releases its meaning only slowly and requires careful focus is a wonderful medium for creating suspense, gradually building character and atmosphere, poem by poem. What a thriller or ghost story requires of us is the recognition of allusions and clues, the exploration of possible interpretations; in other words the practices of an appreciative reader of poetry.

These points also apply to ghost stories told through film and Docklands similarly uses the filmic technique of close-ups to reveal more and more of the architect and his wife’s characters — his ruthless arrogance, her terrible despair.  Event after terrible event is brought to life through telling details. When an apprentice is wallpapering one of the architect’s new properties he not only remarks that a girl was murdered “by ’ere” but conveys its grisliness, saying he hopes “tha’ fucker Foley” “took ’is time to croak”. Meanwhile the architect notes:

a bubble.  I fought an urge

to prick it with my pen.

When the architect witnesses a death (there are many) while drinking oolong on a café terrace  (“… I saw the infant boy/cracked sideways by the flouncing mare”), the café owner is depicted:

arching over with the sugar tongs - so close

I read the bonewhite buttons

on his waistcoat: Cardin, France.”

When his grieving wife is hanging out scarlet ribbons laden with lard for the birds, he describes the ribbons “ranged/like gashes on her wrists”.

Such is the suspense built up here that I would do the collection a disservice if I revealed its dénouement. Certainly the architect and his wife undergo profound personal transitions, offering a nuanced sense of their characters and circumstances.  But maybe I wanted a slightly darker ending - I have already ordered Damian Walford Davies’ earlier collection, Witch. For all that, though, I relished the complexity of these poems’ language and their references.  Sometimes their syntax skillfully takes you to the brink of incomprehension -   then catches you up on a line or stanza break to lead you more deeply into a world that is remote, yet here made satisfyingly plausible and intriguing.

'While these old bones are still working, my darling, let's dance' ►