It's goodbye from him ... Julian Jordon hands over baton at Poetry Jam's 10th anniversary 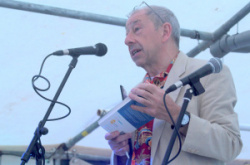 It was the end of an era at Write Out Loud’s Poetry Jam at Marsden jazz festival on Sunday. The ever-popular and energetic Julian Jordon bowed out after a decade of compering the event, and handed over the baton to effervescent performance poet Louise Fazackerley.

But this was no tearful farewell, despite the rain falling outside the marquee. The numbers attending – around 80 for past two years – once more made it standing room only, if you could find somewhere to stand.

Schoolchildren and other young poets made their third appearances at the jam, and emphasised how it has changed over the years. For the open-mic event also provided a chance to launch and promote the Marsden the Poetry Village competition anthology Together, judged by Patience Agbabi, in which youngsters play a big part. Julian, a grandfather of three, has always welcomed them to the stage - and now it was the turn of Louise, who already knew many of the youngsters from running poetry workshops with Gaia Holmes in a project organised alongside the anthology. 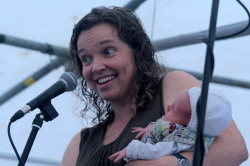 That was one highlight of the jam, of which more later. We also had our youngest ever ‘performer’ at the mic, babe-in-arms Robin, there with his mum Jenny Hanson who read ‘The New Bairn,’ by her grandfather, Scots poet Robert Garioch. This year’s poetry jam, after many years at the Railway pub up the hill by the station, had moved back down the hill to the big, welcoming marquee at Hanson Musical Instruments and Community Arts, run by Jenny and her husband Alastair, and facilitated by the jazz festival's Simon Wood, with plenty of refreshments on hand, including bacon butties and sizzling sausages, essential on a chill autumn day when most poets kept their hats and coats on when performing. 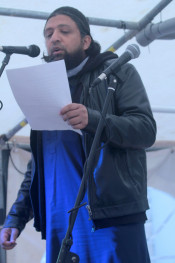 More memorable moments? Mohamed Saloo, pictured right, from Batley Poets, a born and bred Batley lad, and very proud of it too, with his poem ‘My Batley’. Another of his poems has the refrain “I don’t want hate, I want hope,” and brought thunderous applause. In deference to the jazz festival, three poets, including guest John Foggin, tried a bit of scat singing or bebop during their performances.

Alan Prout opened the jam, reading from his prize-winning pamphlet Then become poems such as ‘Like sheep?’, a plea for tolerance and mutual respect in these hot-headed times. He was followed by Tim Taylor and a poem about rain. Bonnie Meekums (“I’m not a poet”, we begged to differ) delivered one she had provisionally titled ‘Wandering Through Saddleworth’.

The beauty of the jam has always been its variety. There was young schoolgirl Kitty Diffley, passionate and angry; and Stan Sagan, exchanging greetings with Julian Jordon in Polish. Keith Jenkinson’s poem about Brexit was remarkably even-handed; Jack Faricy’s about zero-hours contracts and the gig economy less so. Jo Haslam’s poem for her granddaughter, ‘A Blessing’, was heartfelt and touching. Jenny Hanson followed that by coming up to the stage with baby Robin, and talking about her grandfather, who “wrote exclusively in Lallans – lowland Scots dialect”. 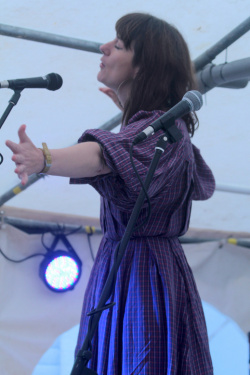 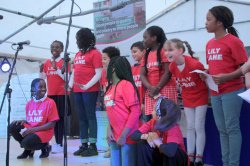 Then came Louise Fazackerley, pictured right, in her initial role as guest poet, her ability to engage with the audience evident from the start. Her first poem was ‘New baby’, “a poem from when I first started writing” – “I’d learnt all the words, but I couldn’t sing the song … like an extra head, she grows on me.”  There was the tough, raw ‘Bird Street’ from her CD Council House Poetry – “My house stinks of death, and faith, and doubt” - , and another about rain, “my favourite weather”. The break came, the moment when Julian handed the compere’s baton to Louise for the second half of the jam. Marsden the Poetry Village Young People’s Project winners Tilly Clear and Jacob Sykes read their poems titled Togetherness. Another Marsden youngster, Flora Smart, took to the stage with her own poem especially written for the festival. And then it was the youngsters from Lily Lane primary school, in Moston, North Manchester, whose headteacher Julia Clark is a leading light in the Marsden the Poetry Village organisation. The Lily Lane pupils first appeared at the jam two years ago  - and they certainly benefited from having a stage to perform on at the marquee, instead of in a crowded pub. Their joy and fun in taking part shone through. Thanks to Louise Watson for coordinating the Marsden the Poetry Village project that included the workshops, poems on posters in Marsden Mechanics Hall and in some shops, and to Jo Haslam and Alan Prout for their support of the MPV project and competition. 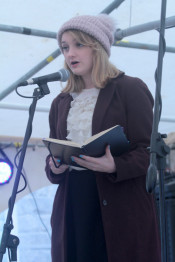 And there were lots more open micers still queuing up to perform. Laura Potts, Write Out Loud’s Gig Guide editor, pictured right, read her poem ‘The Picture in Ireland’, set in 1972 Belfast, from the competition anthology - powerful and lyrical, and with echoes of Dylan Thomas, I thought. Ann Kershaw made her debut at the mic with a poem about her sister’s allotment. Poetry can also be about repetition – and Kathy Trout, founder of West Yorkshire Dog Rescue, and a regular fixture at the poetry jam, was back once more to deliver her impassioned poem about pet welfare, becoming very emotional at its conclusion.

Then it was helter-skelter towards the finish – and apologies to those poets such as Jacky Pemberton and Ann Broadbent that had waited patiently to perform, only to find themselves limited to one poem each because of time pressures. I blame the bloke doing the list, well, partly anyway  … oh, that was me. At The Railway there was never a jazz festival band waiting to set up after us. Here there was. We may have to come up with another plan next year.

Poetry jam favourite Felix Owusu-Kwarteng summed up the situation with his poem ‘Tick tock’, before last of the open micers Jonathan Humble provided a fitting finale with his amusing ‘Schrödinger’s Mouse’. 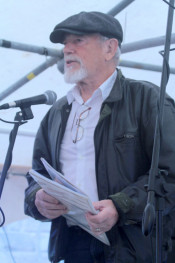 Guest poet John Foggin, pictured right, Write Out Loud’s esteemed regular blogger on poetry matters close to his heart, completed the bill, and gracefully delivered four poems before bowing out because of the time, and because he was feeling rather chilly. His ‘All That jazz’ has a number of memorable lines, including “Monk, remote and rapt in wraparound shades … a Jackson Pollock wind … Outside in the dark the coal train’s gone years ago.” Coal train, but I was thinking Coltrane, too.

And suddenly it was all over, without even enough time for Louise to thank Julian for all his hard work over the years. In the circumstances, Julian himself was a man of few words: “I’m clearing off because 10 years is quite long enough.” Someone called for three cheers for the man at the mic – his sunny Hawaiian shirt both defying the onset of autumn and somehow reflecting its colours - who thought long ago that poets taking part in the jazz festival might be quite a nice idea.

◄ 'We trade our hungers for hearth, for the clank and hiss of warmth'

Aaaaaahhh … the memory of the smell of bacon sizzling at the back of the tent still lingers.