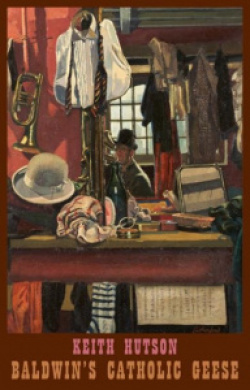 Keith Hutson is a poet who has emerged to widespread acclaim via a more unconventional route than most. He is a former Coronation Street and comedy writer, whose debut collection, Baldwin’s Catholic Geese (Bloodaxe) is a loving, amusing, poignant and beautifully crafted compendium of well over 100 poems about music hall and variety artistes – the wilder and wackier the better – and more well-known showbiz celebrities.

They include such curiosities as the Dancing Quakers,  the “walking farm” Percy Edwards, a man who kicked his own backside, slow-motion wrestlers, a performer who sounded like the Orient Express, the Singing Jockeys, and the man with the xylophone skull (before concussion and dementia set in). A redundant Widow Twankey walks into the waves. George Formby’s tubercular performer dad gets a mention, as well as his lad: “Last artiste to leave Dunkirk, first back / after D-Day, buck-teeth bared / against the bullets”.

The Les Dawson poem (‘The Audience’) is unexpectedly moving at its conclusion. Hutson’s encounter with “someone who was no taller standing up as sitting down” begins inauspiciously in the theatre bar at the Palace, Manchester, when the poet proffers the not-so-great man some sketches, and receives a curt response. Then he finds out why:

Then softer: Sorry son, I’m not myself.

The missus … but your punchline was,

She’s not got long – and nothing mattered

but to hold her hand.

Trouble is, I love that girl. Still, where there’s life …

We almost hugged, then you had to push off.

to do your stuff. I hoped you could use mine.

Nothing’s impossible, you said, from far away.

He also meets Dick Emery, and recalls fondly “that dressing-room hour spent / with you, dead beat, explaining laughter like / a schoolmaster, to set my mind alight.” Hutson’s verdict on the middle-of-the road Ray Conniff Singers is much sharper:

when not resisted, that could send you

to a state of elevated apathy,

But there is sympathy for Gilbert Harding, the Rudest Man in Britain (‘Go Gentle’); and a hard-hitting poem about Jewish bandleader Lew Stone playing for racist toffs “who saw the war out in the bomb-proof Dorchester” (‘Hostilities’). And who better than Hutson to compose an elegy for the creator of Corrie, Tony Warren?:

Barely turned twenty-one, about to take

those matriarchs and make them Elsie, Ena,

he was you: bright boy, back-alley dreamer.

Keith Hutson is a writer at ease with words; he has been a fixture on the poetry scene for a number of years, widely published in magazines and journals, and delivering workshops within the community. These poems are composed with love, and wonderfully crafted. Many of them are sonnets. The notes at the back are almost as entertaining and informative as the poems, and the bibliography includes a book by a former prime minster whose father was a music hall performer. Baldwin’s Catholic Geese is an utter joy, a collection to treasure, and should be given to those who think they don’t like poetry, but do like a laugh. I, like many other reviewers, warmly recommend it.

◄ Thinking about extinctions: 'This Tilting Earth', by Jane Lovell

'We trade our hungers for hearth, for the clank and hiss of warmth' ►