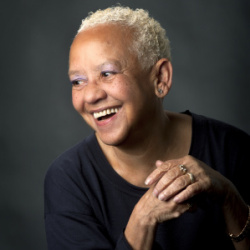 Poetry International is at the forefront of the forthcoming London literature festival, and will take place over five days from 17-21 October of the 11-day festival at London’s Southbank Centre.

Monday 21 October sees American poet Nikki Giovanni, pictured, discuss the power of literature with poet and critic Bridget Minamore. Nikki Giovanni, a leading light in the Black Arts Movement of the 1960s and 70s, has been widely lauded for her reflections on subjects including race and politics, friendship and sexual desire, motherhood and loneliness.

Other events include the launch of Poems from the Edge of Extinction on Saturday 19 October, an anthology of poetry from around the world written in endangered languages. Edited by National Poetry Librarian Chris McCabe, this anthology brings together poets from each continent to highlight the pressures their languages are placed under and to celebrate their work as poets and activists. Poems from the Edge of Extinction had its beginnings in the Endangered Poetry Project, which was launched during 2017’s Poetry International.

On the same day d/Deaf Republic: Poets on d/Deafness will feature multi-award-winning poet Raymond Antrobus, Ilya Kaminsky and Lisa Kelly. On Friday 18 October you can hear poet, playwright and broadcaster Lemn Sissay reflect on a childhood in foster care, self-expression and Britishness at a discussion of his new memoir, My Name Is Why.

'That river of sky, neck stretched toward heaven, maybe beyond' ►

Events » Write Out Loud at Bolton Socialist Club is cancelled

Events » Wigan Write Out Loud at the Old Courts tonight