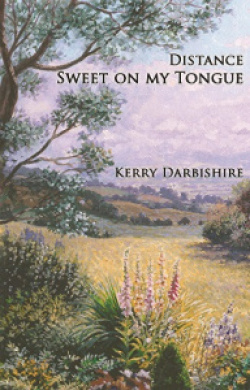 Songwriter and poet Kerry Darbishire lives on a Cumbrian fellside in the Lake District with her artist husband Stephen. Her first poetry collection, A Lift of Wings, was published by Indigo Dreams in 2014 and Kay’s Ark, the story of her mother, was published by Handstand Press in 2016. She is a member of the Brewery Poets, Dove Cottage Poets, Write on the Farm Poets and Barrow Poets and her poems, which have appeared widely in magazines and anthologies, have won several prizes.

Darbishire’s collection opens with a quote from James Sheard’s latest book, The Abandoned Settlements. Given Sheard’s sense of place, his ability to capture permanence and fragility, love and loss, it fits neatly into some of the themes explored in Darbishire’s collection. The fact that the quotation happens to come from a poem called ‘Cardamom’ no doubt appealed to Darbishire because of her enjoyment of cooking which also reveals itself in one of the titles of her poems, ‘Notes in Lemon Juice’ and in other lines in her book. Like Sheard, Darbishire is a poet of place. With one exception, all the poems in her collection are rooted and grounded in the Lake District. Titles such as ‘The earth of Cumberland is my earth,’ ‘From Coniston Water,’ and ‘Returning to Rydal Mount’ leave us in no doubt that this is a poet who is at one with her native landscape. The one exception is the very last poem which is set in Milan. The last line, so far from home, gives us the title of the book: ‘distance sweet on my tongue.’

In this collection of 60 poems, Darbishire writes engagingly about her family, her childhood and people and places she has known and loved. Her real strength lies in her descriptions of the natural world which sometimes act as a backdrop to other narratives and, at other times, take centre stage themselves. In ‘Another Life’ she tells us:

I can work deep into the night until

my wall of blank canvas is a happy marriage

of colours that love and surprise each other

with possibilities of danger.

In some of the ‘character poems’ certain features are described in terms of the Cumbrian landscape: in ‘Seventeen’ a man “sits too close, snores on my shoulder, his skull / weighs heavier than a beck boulder” and in ‘Living on Dreams’ a man has a face “the colour of Eden valley stone”.

A return visit to High Borrowdale Farm is full of nostalgia but does not fall into the trap of being sentimental. It is more a celebration of the enduring powers of nature than a loss of a domestic dwelling:

curtains and bread oven are gone,

Not surprisingly, there are references to art and artists (Picasso, Schwitters, Hockney, Klimt, Stokes). There are also poems inspired by other poets such as the Australian-born Lisa Brockwell and, closer to home, the late George Benson who, like Darbishire, was a member of the Barrow Poets and a poet-in-residence at the Wordsworth Trust. Music, too, plays its part. Popular music, particularly from the 1960s, sets some of her work in context but classical composers also make their mark.

Stylistically, even though her poems are written in free verse, Darbishire pays close attention to stanzaic form. Several poems are written in the form of sonnets and all the others show a rigorous regard for consistency in terms of stanza length or stanzaic patterning. For example, ‘Army Blanket’ comprises five stanzas of three lines each, ‘Rooted’ has four stanzas of six, five, four and three lines each and ‘Fence’ follows a pattern of one four-line stanza followed by a single line throughout its sequencing. In skilled hands such as Darbishire’s, adherence to these patterns is hardly noticeable unless one takes a step back from reading the poem to see how it sits visually on the page.

Shortly after I had finished reading this collection, memorable turns of phrase kept returning to me in the quiet hours. In ‘Second Nature’ Darbishire writes about rain that flows “like wedding veils / down the fells,” in ‘The King in the Park’ an Elvis lookalike has “brown eyes tight / as bedroom curtains” and in ‘To Walk with Night’ “the gate stoops hunch in age and cattle graze / a sneck-smooth valley milk-spilled /with moon …” For those who enjoy poetry that is both descriptive and atmospheric, this is a book that will resonate in the mind for some time to come.

To tell the Truth, it's National Poetry Day! ►

A review that sets the taste buds flowing in desire to learn more of Kerry's work. Thank you.