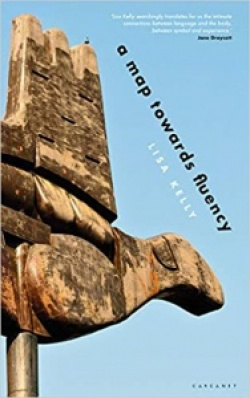 Walter Benjamin said that “Work on a good piece of writing proceeds on three levels: a musical one, where it is composed; an architectural one, where it is constructed; and a textile one, where it is woven” and it’s that final word, “woven”, that I can’t stop thinking about as I read Lisa Kelly’s work. Her debut collection is a fine fabric shop displaying the most wonderful array of fabric weight, pattern, design hue, intensity, transparency, degrees of brilliance and surface contour.

The book is divided into seven sections, with titles such as ‘Scale and Accuracy’, ‘Coordinates’, ‘Navigation’, all of which build up and add to the sense that the book is a map of Kelly’s own life and life experiences thus far. A poem in the first of these sections, entitled ‘ø’, perhaps best sums up Kelly’s intentions for her project, dealing as it does with the fact that she is “half-Danish and half-deaf”:

tastes the sound of ø

A later section, titled ‘Orientation’, deals explicitly with Kelly’s difficulty in hearing and speaking - the words ‘tongue’ and ‘ear’ pop up all over the place and the poem after which the collection is named cleverly traces Kelly’s own struggle to learn British Sign Language.

But it is the sheer verve and poise of all of Kelly’s poems that really impresses. Above all, she is an inventive, playful poet, most of all with form. The first poem of hers that I ever came across was ‘And I Have Seen’, which deals with the consequences of fracking and the gases that it releases, which can catch fire on rivers and kill fish species. The poem is written as a preacher’s warning of the oncoming apocalypse and plays with biblical images and primal colours - orange, black. Words are repeated, building a strong sense of prophecy and doom, and lines are put in a specular form, but the form isn’t exact, which keeps it feeling organic rather than a dry exercise.

Another formal tour de force is ‘This Is Not a Road Trip’. The setting is a large bay in south Brittany, in which various things are happening at once - a boy is throwing a stone into the sea, a horse rider crosses the sand, a fisherman comes in with full nets. Overlooking the bay is a house, in which the Minaut family live. The son, Patrick, has just died and the poem begins with this statement. Kelly holds each event separately and then connects them all in the bay, rather like the separate elements in a Miró painting that inter-relate, or like Auden’s ‘Musée des Beaux Arts’, in which tragedy goes unnoticed and life carries on. The form of the poem, with elements repeating, and lines gradually indented and then pulled back to the margin, create a wave-like motion which reflects its setting. This poem is remarkable for its symmetry, its inward tension and its balance.

There are several poems that are made up of parts, or sequences of poems, in the collection, including the extraordinary ‘Apple Quartet’ - is there anything more gorgeous in the English language than a list of the names of the different kinds of apple? Another sequence of poems is “Coronas/Cuts”, actually a crown of sonnets that deftly weaves lines and images from John Donne’s work into Kelly’s own moving meditation on the inevitability of sons leaving home and, startlingly, on knife crime.

Kelly also uses herself and her family as subjects for her poems. ‘Six Perspectives on Lilian Kjærulff’, for example, is a series of six views on the poet’s mother from different familial perspectives – “second daughter from a second marriage”, “first husband”, etc. The result is a clever and intriguing Cubist portrait of a woman who nevertheless retains an air of mystery and elusivness. ‘Clavical: snaps’, ostensibly about a cycling accident Kelly was involved in, morphs into a wider discussion on mortality by referencing David Cronenberg’s Crash, the Japanese tradition of Kintsugi (the repairing of broken pots using gold) and the myth of Apollo and Daphne.

Other poems that deserve a special mention are the moving ‘Let Them Leave Language to Their Lonely Betters’, the deeply mysterious ‘Saltatorium’ and the melancholy of ‘Aubade for an Artist’, but I could go on and on. For me, a great many debut collections tend to have a lot of filler in them, but not so with Kelly. The core strength of the work is impressively maintained from beginning to end. There are more ideas per page here than most collections of poetry could only dream of and it will be an absolute travesty if A Map Towards Fluency doesn’t win a major prize in the coming year.

Richard Skinner’s poetry first appeared in the Faber anthology First Pressings (1998) and since then in anthologies for William Blake, John Berger, CALM and Médicines Sans Frontières. He has published three books of poems with Smokestack: the light user scheme (2013), Terrace (2015) and The Malvern Aviator (2018). His next collection, Invisible Sun, will be published by Smokestack in 2021.

Poets add their voices to protests on Climate Strike day ►