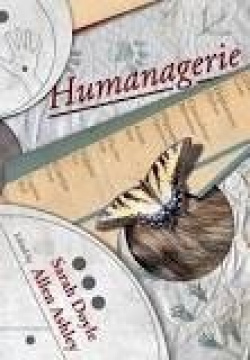 The borderland between humans and animals has been a source of fascination for writers down the ages. Think of Eugene Ionesco’s Rhinoceros, the lycanthropy of Ferdinand in Webster’s The Duchess of Malfi or, in Celtic mythology, the idea that butterflies are the souls of the departed. The writers represented in this anthology of poetry and prose make use of both anthropomorphism (the attribution of human traits, emotions or intentions to non-human entities) and therianthropy (the mythological ability of human beings to metamorphose into other animals by means of shape-shifting) to construct their poems and storylines. These literary devices may or may not be symbolic but they continue to form an important part of a writer’s means of expression in folktale, fantasy and popular culture. In his short story, ‘Her Audience Shall Stand in Ovation’, Jason Gould offers us one possible explanation for this trend when he speculates through the medium of his fiction that “longing to transform from human to animal is longing to be excused from humanity, to exist outside its protocols and practices”.

The animal world is well represented in this collection. Alongside foxes, deer, bears and sheep, already extensively written about, there are some more unusual animals such as Sarah Westcott’s beetle,  Elaine Ruth White’s sloth “hung, slung / like a cedilla,” Jason Gould’s earthworm, Tarquin Landseer’s seahorse who “thrusts a herd of foals / from the brood pouch; / scatters them like question marks, / the time ahead in doubt,” and, by the same writer, a colony of bats whose “pips pitch above high F / bright pinpoints / of sound that map / the dark’s unseen / with half-sight …” Even the dodo gets a mention.

Setarah Ebrahimi’s visual poem, ‘Sturnidae’, mimics to some extent the patterns made by a murmuration of starlings. Lauren Mason’s poem ‘Sanctuary’ startles the reader with its striking use of vocabulary: “New guy came yesterday, wet-fresh / from the scrub-down room with a side jab / to his step that put us all a-skitter.” Its tight-lipped talk provides an interesting contrast to the more relaxed tone of Jonathan Edwards’ contribution titled ‘And Then I Was a Sheep’ where a run-in from the title to the first line gives an unorthodox opening with the words “and really, what a treat to find myself / among these friend-shaped clouds or cloud-shaped friends …” There is a telling comment on the human condition in some of the lines that follow: “I wouldn’t go back if I could. I’m less / lonely than I was when I was human …”

Of the short story selections, there are strong contributions from Gary Budgen, Ian Steadman, Sandra Unerman, Bindia Persaud and Tracey Emerson. Once again, the subject matter is varied: a woman who exacts vengeance when she turns into a tiger at night, a girl’s ambition to become an invertebrate, fish in an aquarium whose peaceful co-existence is set in direct contrast to violence in the home, a young woman with a far too active imagination who chooses to test her fear of snakes to the limits of her endurance in the back of beyond and a lonely man with a broken marriage who seeks solace in the company of a goldfish. Some of these stories, such as Ian Steadman’s ‘Rut’, revolve around a play on words while others examine in more detail the close interface between animals and humans in a variety of urban and rural settings. Some are disturbing, others pure fantasy.

In making their selection, the editors have ensured that there is a good balance of styles and themes, humour, fantasy and suspense. Helpful footnotes, where appropriate, are given within the text and short biographies of most of the contributors are provided at the end. Recommended.