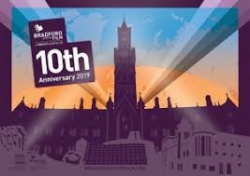 ◄ Write Out Loud at Stockport art gallery on Monday

Confessions of a tripe addict ►