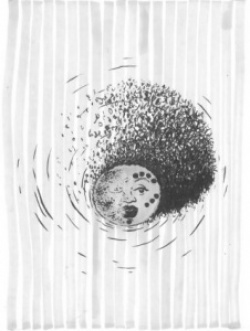 Keisha Thompson is known as a poet with a charismatic performance profile and an intellectual passion for maths. Her show Man on the Moon has won the Manchester Theatre award for best studio production, and with good reason. The script Man on the Moon is inspired by Thompson’s unconventional relationship with her reclusive father. Lunar is a collection of 40 new poems, accompanying the excellent script for Thompson’s one-woman show.

Thompson masterfully conveys an independent, ambitious daughter’s concern for her father Kemet. This man has had four different names, converted to Islam, calls his daughter a heathen and communicates with her via books and CDs. It does not matter if these stories are true or not; if Thompson’s narrator is a version of the self or many imagined selves. As a figure of distant but loyal parenthood, Kemet could not be more intriguing.

Lunar begins with a glossary of scientific symbols. Unusual forms – graphs, Venn diagrams, tables of moral reasoning – appear alongside prose-poetry and more conventional, lineated poems. The result is a collection that borrows techniques from both maths textbooks and spellbooks: alchemy and numerology also feature. The introduction explains this distinctive method: ‘I hope it isn’t too alienating … But to be fair my dad is an alien so maybe that is how I want you to feel.’

‘Singularity’ gives a reason for Kemet’s self-imposed isolation, the situation that triggers the daughter’s quest to get to know him better:

blame his inflamed IQ • find a

label for all of this …

‘Enneagram’ describes personality types, hinting at a need for children with unconventional family backgrounds to become their own father-figures. In spite of the distance between daughter and father, Thompson’s narrator describes Kemet with great tenderness: it's clear that he nurtured his daughter’s talent for numbers by dropping books about quantum physics through the letterbox.

Along with an interest in mathematics, Thompson’s speaker voices her frustration with European cultural amnesia about its origins. ‘Algebra’ is a brilliant poem about structural racism in the education system:

we know this theorem to be named

after a Greek man despite it being

used by the Egyptian civilisation to

build the pyramids. It was used by the

Babylonians before Pythagoras was

getting his ass kissed by Euclid. So

why is it named after him with no

mention of its heritage?

In addition to fatherhood, motherhood and feminism are recurrent topics. ‘Reasons not to have children’ shows an atom-like structure: the reasons orbiting around a nucleus labelled ‘Dogmatism.’ Inherited trauma is one motive for being child-free, but political upheavals and racial inequality are the most compelling: ‘Terrorism, acid attacks, police brutality, white privilege, Brexit, economic instability, global warming’ arrive in an overwhelming flood at the end of the diagram.

‘Dogmatism’ and its reinforcement of patriarchal norms are reasons for the religious tensions between Kemet and the narrator. ‘Kafan’ imagines shrouding the dead father, according to Islamic custom – a tender act of devotion across generations. Yet Kemet’s many identities persist: "How do I bury the other men he has been?" The poems are fragmentary, as if orbiting each other at a distance; but this is part of the point. Algebra, we are told, means ‘the reunion of broken things.’

The script is enticing on the page and brilliant in performance. Before the show, Thompson gave the audience numerology charts so they could work out whether their own names were lucky or unlucky. The stage was littered with towering piles of books. Looped sounds and hauntingly powerful vocals created a touching sense of longing for this mysterious man. She’d like to ring him, but he doesn’t have a phone. Thompson has a knack for creating thumbnail sketches of people and places in metaphor. She creates a wry pun on the mathematical meaning of ‘eccentricity’ (the deviation of an ellipse, such as the moon’s orbit, from a perfect circle).

Thompson hints at a family history of mental illness; social services and the hospital have no interest in helping Kemet, who is becoming vulnerable in his old age. You can’t help wondering how this man who once loved disco flares and kung fu in Jamaica has ended up isolated in the Manchester suburbs. A sense of alienation created by deep-rooted discrimination haunts the book. However, the ending is redemptive: a dramatic journey through Manchester ends, finally, in a sighting of him. By the end of act three, the stage is transformed to an afro-futurist spaceship that transports father and daughter to the moon, away from war and hatred.

If Thompson’s graph-poems are sometimes as complex as Fermat’s last theorem, you don’t need to be a rocket scientist to be moved and exhilarated by Man on the Moon.

Keisha Thompson, Man on the Moon

Yvonne Reddick is a Research Fellow in Modern English and World Literatures at the University of Central Lancashire. Her latest poetry publication is Translating Mountains,, and her latest monograph is Ted Hughes: Environmentalist and Ecopoet

'We all lose something, though that day I hadn't lost a thing' ►