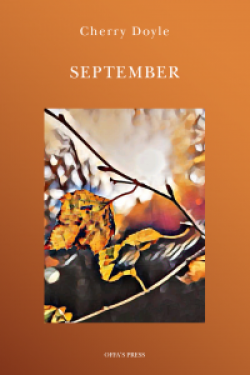 Cherry Doyle, who recently completed a BA in creative writing with the Open University, is one of the co-ordinators of Blakenhall Writers’ Group based in Wolverhampton. Born in Shrewsbury, she now lives in Staffordshire.

Cannock Chase, with its mixture of natural deciduous woodland, coniferous plantations and open heathland, provides much of the raw material for this debut collection. Despite being relatively small in area, the chase provides a remarkable range of landscape and wildlife, some of which are captured in this attractively produced pamphlet. We encounter screech owls whose eyes are “bowls of light / rippled with moonlit veins,” wagtails that scatter “like a handful of change” and a pheasant “who left Asia and landed on a Staffordshire verge”. To Doyle it is a magical place, a place where “you could drown in the shadows”, where “branch meets root meets earth”.

September, in the northern hemisphere, marks the beginning of meteorological autumn and in the poem that bears the title of this collection, Doyle makes us sense the season that it heralds  – that time when “summer yellows at the edges”, and “the moon is a far-off thumbprint at the corner of the page”. Not all the poems are related to the month of September. ‘Crabapple’, for example, opens on Mothers Day, and elsewhere we get a sense that the heart of winter is never far from her poems. Snow, or rather the thought of it, “looms like the dread of skidding wheels; a sudden end”.  Something of the barren nature of winter is caught in the concluding poem ‘There is Nothing’:

in the woods, no silken breeze

the black bulk of trees

to muddy the diamond night

nothing under our feet

The brevity of the lines and their chosen format as a series of couplets adds to the sense of sparseness contained within the poem. This is just one example of the way in which Doyle pays attention to the way in which she chooses to present her poems on the page. In ‘Halcyon’, the joy of spotting a kingfisher evokes wonder which is captured in shorter lines with some hyphenated words compared to the rest of the poem:

the last glitter of waves before Aegean salt fills her lungs.

Similarly, in ‘Aki’, the choice of words and the way in which the sequence is presented visually on the page accurately convey two of the homonyms of this Japanese word which can mean both “autumn” and “vacant”.

Not all the poems are about the natural world. Some are reflections on personal loss, others, such as ‘’Eaven for Thruppence’ and ‘Before I Met You’ are written with a fine sense of warmth and humour:

Before I met you, I never knew

that a cob doesn’t always eat grass in a field,

that square bread comes in rounds,

or that anyone could say the word bonk

with a straight face.

This is a collection full of promise from an aspiring writer who is already keenly aware of the beauty of the natural world and her relationship to it. Fully recommended.

'I must have brought their home inside for fuel, heating my small house' ►