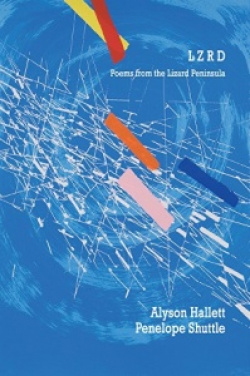 LZRD is a title that is notable for its absence of vowels. The human brain, so used to recognising words, quickly fills in the blanks. In the poem of the same name, Lzrd is described as a “squeezer of vowels from words”- a “crazy misfit Cornish wonder”.

This is the corner of Cornwall that writers Alyson Hallett and Penelope Shuttle like the most. The story of their collaboration on this collection is related in a very helpful and informative postscript by Alyson Hallett at the end of the book. Surprisingly, a warning to travellers about an imminent storm, in this case, Storm Imogen, prompted them to “break into the gale like thieves” and head off to the peninsula  Several more journeys ensued, each one described as a “holy act” to the place where “one hazy day leans / into the next.” In a second postscript, Penelope Shuttle describes some of the “off-the-map jaunts” that she and her late husband, the poet Peter Redgrove, used to take to that part of Cornwall. The book is dedicated to his memory.

A note from Catherine Leyshon, associate professor of human geography at the University of Exeter, provides the reader with an excellent account of the geography and geology of the peninsula.

On reflection, these notes might have been better placed at the start of the book since, together, they serve as useful introductions to the collection and prepare the reader for what is to come.

It is clear that these are very personal poems evoking memories that are only known to their respective writers. There is a danger here because the emotional impact that their words have upon them might not resonate with their readers to the same extent, and certainly not in the same way. In these circumstances, the writers need to work extra hard to draw their readers in. By and large, Alyson Hallett and Penelope Shuttle have succeeded in doing this.

Several poems in this volume provide us with two ‘takes’ on a particular incident: ‘Candles for the Well’ and ‘Lizard Bible,’ ‘Hum’ and ‘Tusk,’ ‘Fig Tree, Manaccan Church’ and ‘At Manaccan Church’ are just three examples. The very different treatment given to the two poems titled ‘Storm Imogen’ shows that this collaboration is far from a duplication and more of a celebration in which two creative minds give expression to a different thought-pattern in response to a shared experience.

Storms and rainbows feature as recurring themes throughout. Both poets write separate poems titled ‘Storm Imogen,’ ‘Named Storm’ is a single poem in two parts and there is a further poem which recounts a visit to the Church of Storms at Gunwalloe where the storm is contrasted with the calm interior of the church building where light flares from a candle without being blown out.

There are some real gems to be found here including some memorable turns of phrase – a rainbow’s double is described as “its little back-up pal”’ there is a sea that “has everything and nothing on its blue mind”, and “arthritic bones” that “ache and moan / like glockenspiels of pain.”

Something of the joy of attachment to this special area of Cornwall is conveyed in this short poem called ‘Hum’ which is quoted here in its entirety:

Returning through the wheat,

I catch a humming in my ear,

touch the telegraph pole planted in the field,

shocked by the power coursing through the wood,

electricity rip-roaring to itself,

rippling sinews of it under my hand,

As someone who appreciates the gift of holy places, many of these poems resonated with me. The visits to Grade, St Ruan’s and Landewednack revel in the quiet beauty of church interiors where Peter Redgrove once remarked that “each church has its own particular silence”.

These poems are immersed in Celtic mythology, ancient springs and shrines, wisdom and folklore, they are peopled with saints and the “ghosts of Avalonia”, landscaped with churches and dressed in serpentine stone. Fully recommended.

In praise of poetry anthologies ►

Thanks for this review, Neil. I was on holiday on the Lizard last week, and ordered a copy of this book from Ronnie and Dawn at Indigo Dreams as soon as I got back. I only wish I'd had it with me when we were down there. Not just a collection of poetry - a wonderful, lyrical guide book to the area.