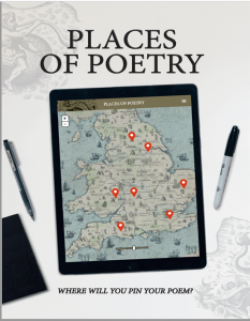 A project aimed at creating a poetry map of England and Wales has seen almost 2,000 poems posted in its first month. The four-month Places of Poetry project, which was launched at the beginning of June, and is led by poet Paul Farley and academic Andrew McRae, is based at the universities of Exeter and Lancaster, and has partnerships with the Ordnance Survey, the Poetry Society, and National Poetry Day. Andrew McRae, pictured below, talked to Write Out Loud about "the democratic nature of the space", its high viewing figures, and the future for the poetry map after the project ends:

How did the idea for Places of Poetry come about?  How difficult was it to set up the technology?

The idea took shape after I got involved in some public-facing work – more limited and targeted – in the process of ‘The Poly-Olbion Project’. This gave me a sense that, perhaps surprisingly, there was a lot about this text that resonated with people today. People love the iconography of the maps, and also the idea of using poetry as a medium for thinking through their relationships with places and their histories. I also met Paul Farley in the course of this project, because he’s been obsessed with ‘Poly-Olbion’ almost as long as me, but comes at it from the perspective of a poet. But the idea took a long time to refine, and that process involved lots of people. We also had to think about it, technically, as three separate projects, since there are three funders and each has slightly different priorities. The technology has been the easy bit – or maybe it’s just that our developer, Andy Chapman, has made it feel that way. Overlaying the maps on each other was tricky, but the business of pinning items to digital maps is quite commonplace these days. In fact there are a bunch of other poetry projects using similar technology [see Write Out Loud’s Gig Guide as one example], so we’ve always been careful not to claim that this side of the project is radically new.

Have you been pleasantly surprised by the amount of take-up so far? What is the latest number of poems on the map? The detail of the map makes the potential number almost limitless, doesn’t it?

We had just under 2,000 poems in our first month, and just under 40,000 viewings of poems. The viewing figure is especially good, because it means that people are coming to the site and exploring. Overall the figures are roughly what we had in mind, although I’ve certainly been surprised by how good the poems have been. The fact that so many impressive, experienced poets are taking the site seriously is really rewarding, and must help to explain the high readership figures. Technically, we could conceivably reach a limit at which the system gets stretched, but we’re a long way away from that. 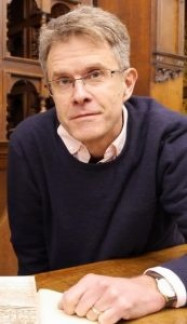 What have been the highlights of the project so far?

We started out with a vision about how writing poetry can have an impact on individuals’ perceptions of the places they inhabit, so it’s wonderful when I see this realised. For example, there’s Sarah Reeson in Southend, who’s written 24 poems about her local environment in response to Places of Poetry. Or there were the cluster of poems about Long Eaton in Derbyshire posted by children at a local school, all engaging sensitively and personally with the history and modern-day image of their town.

Write Out Loud is impressed by the inclusivity of the project. There is very little ‘gatekeeping’ involved – it is usually fairly easy to pin your poem to the map without mediation. Was that one of your aims from the start? What are the kind of reasons for poems occasionally not getting approved?

Yes, we like the democratic nature of the space, and we’re determined not to make judgments of quality. We’ve probably accepted about 95% of the poems submitted. But we require some connection with place, so we’ve rejected a few random love poems that wouldn’t mean anything to readers in the context of the map. And we have to be sensitive to the site as a resource for readers of all ages, so we’ve had to reject a couple of poems on these grounds. There was one poem that was actually very good, recreating a historical scene, but also quite sexually explicit. You have to ask: if the local primary school teacher is thinking about engaging with the project, and opens this poem, what’s the response going to be?

In a project of this magnitude, there may be the odd technical glitch. A few poems are missing a final odd line or two, after they appear ok when pinned to the map. Your rule is that you can’t edit the poems afterwards. Are there any plans to address / have you looked at this occasional problem?

Actually I think we’ve responded to just about all of the glitches, and some were actually misunderstandings, so we’ve been happy about this side of things. Editing or moving poems after submission would only be possible if each user could create a separate login – and that would have been more expensive and much more cumbersome, deterring many potential users. But I’d want to stress that so far we have been able to accommodate anyone who has contacted us with a problem – usually by taking down the poem so that they can start afresh. We don’t make any promises, but unless we suddenly get inundated with poems we can keep dealing with our writers in this way. Twitter is the quickest means of communication. We want to keep everyone happy.

When the four months of the project is over, will the Poetry and Places map remain in place on the internet?

It will be open for people to pin poems until early October – we’ve said the 4th, but it depends a bit on demand around National Poetry Day on the 3rd. We’re committed to keeping the site in place in a read-only form for at least five years, dependent largely on the longevity of the software. But I’d love to see it survive as a live, interactive site in some form. In an ideal world I’d like to expand it to include Scotland and the whole island of Ireland, and run for another season – but I have no idea where we’d get the money for that. Another possibility is that the brand and platform are taken over by a suitable big non-commercial organisation – we’re having some initial talks about that.

Background: Mapping England and Wales with poetry - how you could be involved