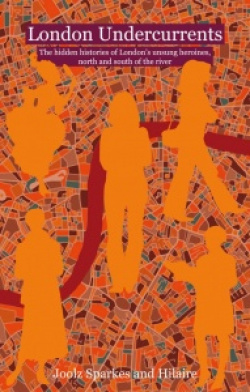 London Undercurrents is the product of five years of in-depth research, part-funded by an Arts Council Grant, by two poets, Joolz Sparkes and Hilaire, into the long-forgotten histories of London’s unsung heroines, north and south of the Thames. The collection spans 400 years and is wide-ranging and ambitious in its scope. Reading it is an education.

It is often said that the river is the great divide, setting and defining boundaries. In this case, it has defined the structure of this book. The poems are grouped by theme into distinct sections and a location and date are given after each title, which helps to orientate the reader.

There are sections on work, education, escapism, nature, war and rebellion. Each of the sections contains a few words of introduction which act as a commentary on what is to follow north and south of the river line. There are interesting links to be found between the two. In the section headed ‘We Don’t Need No Education’, for example, we read "Ignore your sat nav./ I know these streets / with my eyes shut"  and "Scattered names took hold, / tenacious as buddleia / on a brick viaduct". It is almost as if these introductory fragments are the words of the two writers and the poems, often written in the first person, are the words of the unsung heroines of years gone by, rendered into modern English. The letters S and N are used throughout the book to attribute authorship. Joolz Sparkes wrote the poems that are set in locations north of the river and Hilaire wrote the other ones. Having said that, it is hard to tell these two writers apart; such is the closeness of their collaboration that their lines are seamless at the join.

We read about a French Huguenot woman planting asparagus in Battersea Fields in 1685, women putting wicks into nightlights in a candle factory in 1928, cattle herders, street sellers, frost fairs on the Thames, women who worked as bus conductors during the war and women who labelled those familiar bottles of Stephen’s Ink that some of us still remember from our schooldays, “barrels of dark / permanence, filled up for worldwide sending”.

The dangers of working with white lead are touched upon lightly in ‘Dodging the Doctor’. In common with many of the poems in this book, the authors skilfully cover many topics in just a few lines – in this case, the conditions of employment, its inherent danger, discrimination against women, hardship and toil:

It’s our job they once said, for girls

But now a doctor visits regular,

warns us Take a bath once a week.

There are moments of happiness here as well. In ‘Battersea Women’s Pub Outing’ there is unrestrained joy “after the war we thought would never end”; in ‘On the Marriage of Catherine Boucher to William Blake’ the poignancy of Catherine not being able to write her name in the register is soon eclipsed when her husband teaches her to read and write and in ‘Lady Cyclist’ the cycling craze in the summer of 1895 is captured beautifully when pitched against the concurrent movement advocating ‘rational dress’ for women, including bloomers for cycling.

The poems encompass a variety of styles. Most are in free verse but some follow a more formal pattern: a villanelle, two sonnets, a ballad in rhyming quatrains and a visual poem that illustrates a tightrope walker crossing the Thames. There are prose poems, music hall songs, poems with experimental layouts and list poems.

A generous set of reference notes is provided at the back. These not only give us an insight into how the writers researched their subject matter but also the conditions of the time. They help to set each poem in its proper context and are invaluable to the reader.

The cover art, designed by Reactive Graphics, shows the silhouettes of women from several different eras superimposed upon a street map of London with the Thames flowing through it, dissecting north from south.

This collection scores highly because of its unusual subject matter, its slice of social history, striking vocabulary and clever wordplay. Above all, it fills a gap in our understanding of the conditions under which women worked north and south of the river. Joolz Sparkes and Hilaire have not only come up with a brilliant idea, they have executed it with panache.

Where are the statues, the blue plaques, the names in reference books, in social histories? Some of them are now in this book. Highly recommended.

'May your twin thoughts spiral upward like leafy vines' ►