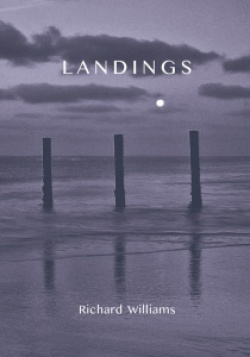 It takes a brave poet to open a collection with two poems that both mention stationery. After all, it’s not at first glance the most poetic of subjects. But then, think of “so many words still to be untied / from the purgatory confines of storage”. (‘The king of stationery’). The theme continues in the second poem, ‘Contents of the loft of an eBay trader’, with  “Large quantities of loose stationery” the first line of a list poem that also includes mixed fancy dress costumes, many thousands of replica London 2012 Olympics tickets (eh?), plus more boxes of discontinued office stationery (33 boxes, in fact). And, tellingly, 28 photographic prints of Portsmouth.

For Richard Williams is a poet of the southern maritime city that looms large in this collection. ‘Spice Islands looking back’ traces Portsmouth’s seafaring history, including the departure of the Falklands taskforce to the South Atlantic in 1982, and the demise of Henry VIII’s flagship Mary Rose. ‘Calenture’ – a feverish delirium once linked to sailors in the tropics – sees “rotting hulks beneath the Solent”, and conjures up nightmarish images of drowned mariners rising up to “float with fish just under the surface”. In a more upbeat, nostalgic poem, ‘On the success or otherwise of disposable barbecues’, Williams recalls fondly larks with teenage girls on the beach, looking across to the Isle of Wight, where “streetlamps from Ryde to Bembridge / were necklaces of precious jewels.”

The poet’s enthusiasm for his city’s football club is depicted in a number of poems that don’t exclude non-Pompey fans – although those that don’t appreciate football at all are perhaps another matter. Portsmouth’s winning of the FA Cup in 2008 after many barren years is celebrated with a heartfelt mix of passion, profundity and sentimentality that all football fans will recognise, with the final stanza attempting to escape the confines of the stadium:

So drink to the presence of greatness,

for everything you do really matters.

Enjoy each of your victories.

Turn on the lights and sing out,

for living is all that there is.

Richard Williams is good on football, evocative in ‘Night flight over Fratton’, that takes in the wider city as well as the football ground, where “The crowd inhales as a shot is struck, / exploding with joy as if life renewed; / Fratton Park surges and we are lifted high.”

However, he is often much more down to earth than this. A romantic poem, ‘The sequencing of lights’, “where thoughts keep drifting / to moonlight through curtains”, nevertheless includes “Detritus on the passenger seat, / McDonalds wrapper, a half-drunk Coke, / a grease-mark that won’t rub out.”

Williams is also good on trains, a fact this reviewer approves of; he may live in another county, but he's at the end of my line. The prose-poem ‘Terminus’ looks out of the window, leaving London Waterloo, passing old airliners at Weybridge, the “purgatory rat run traffic jams” of Woking and Guildford, and on to the country, past “picture-book postcards of post-rural bliss”, before arriving in Portsmouth, “Fratton Park rising up under a lowering crowd”, those fans “swaying … as if standing on deck, in a mid-Atlantic storm on a convoy corvette”.  With its awareness of wartime train embarkations as well, I found this a deeply satisfying poem. It’s followed by two other railway poems, the latter, ‘The next station is’, concluding with the tender line, “this city by the sea and all that we need.”

Portsmouth may be the end of the line, but it is also a starting-point for new worlds, and a place of arrival, too.  The collection’s title poem has 32 stanzas, and its sweep includes modern-day atrocities, from Aleppo, Brussels, Paris, Mogadishu and Manchester, “so many stories that won’t now be told”.  It has at its centre that image that haunts us all, of a little boy washed up on a beach:

Some images imprinted can never be unseen;

like the softness of sand on a glorious bay,

a toddler in a t-shirt at the end of a wave.

Here I sit on my cold-water island;

Our we are full sign our hearts silted up.

I should also mention that in his acknowledgements Richard Williams takes time to thank “all the poetry editors who have read and considered my writing, (whether accepted or not!),” pointing out that without their unpaid efforts, “the vast majority of poets [would be] unpublished and unrecognised”. Hear, hear; well said, that man.

Yes, this is a collection about trains, and boats, and stadiums, and even stationery. But Richard Williams is capable of looking much further and often does; he has his eye beyond the shore of his “city by the sea”, gazing out to the horizon.