Competition closes in 19 days, 2 hours. Get details and Enter.

The poetry of science: new book links creativity and discoveries 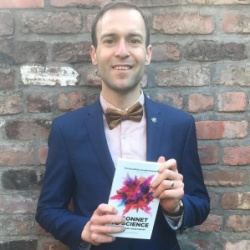 A new book that investigates the ways in which poetry has influenced the lives and works of six pioneering scientists has been written by an author who writes a weekly poem about science.

A Sonnet To Science: Scientists and Their Poetry is by Dr Sam Illingworth, senior lecturer in science communication at Manchester Metropolitan University, who writes poems about science  “to try and communicate some of the beautiful and important scientific research that is being done on a daily basis, all across the world”.

On his website he says: “My research involves looking at the ways in which different media can be used to connect science and the rest of society, and one of those ways is through poetry. Every week I find a new piece of scientific research, read the journal article that describes it and then write a poem that tries to summarise the research in an accessible and entertaining manner. Some of the poems may be faintly melancholic, some of them may raise a smile, and hopefully all of them will make you think.”

One of those profiled in the book is Ada Lovelace, the estranged daughter of the Romantic poet Lord Byron, who hypothesised that Charles Babbage’s Analytical Engine could be harnessed to compose music, becoming one of the first to recognise the power of a 'computing machine' outside of pure calculations.

Dr Illingworth said: “This was an astonishing insight, essentially foreshadowing the formalisation of the universal computer, which would not be done by Alan Turing for almost another century. Despite the protestations of her mother, Lovelace was also an accomplished poet, later acknowledging that it was her poetic talent that provided her with the metaphysical insight needed to make these scientific advances.”

The book also looks at chemist Humphrey Davy, who experimented with his writing, shaping observations into verse while testing the effects of laughing gas. Dr Illingworth said: “As well as being renowned for his discovery of elements such as sodium and potassium, Davy was also celebrated by poetic luminaries such as William Wordsworth and Samuel Taylor Coleridge for the quality of his poetry.”

More recently, Canadian astronomer Rebecca Elson also used poetry as an investigative lens through which to better understand her scientific achievements. As one of the first scientists to use measurements from the Hubble Space Telescope to look back into the early stages of the universe, Elson was frustrated when it transpired the images being beamed back were of a lower quality than expected – because a mirror had been polished to the incorrect shape by just one 50th of the width of a human hair. Elson’s irritation at the misfortune fuelled her poem ‘Aberration (The Hubble Space Telescope before Repair)’.

Dr Illingworth said: “This book investigates the role that poetry played in the lives and work of several incredibly successful scientists, and argues that in part they were able to achieve what they did because of their poetic sensibilities. By looking at the lives and poetry of these scientists we are able to better understand that science and poetry are not mutually exclusive entities, but rather complementary disciplines that can give us a better understanding of the world around us.

“I hope that this book inspires people to realise that they are not defined by the labels that others thrust upon them, but rather that they are human beings with infinite potential.”

The book is being launched at Blackwell’s bookstore at University Green, 146 Oxford Road, Manchester, on Thursday 20 June at 7pm. You can register to attend for free. A Sonnet To Science: Scientists and Their Poetry is published in hardback by Manchester University Press and costs £20.