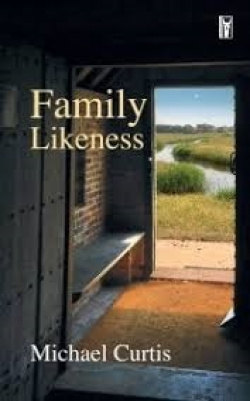 Michael Curtis grew up in Liverpool, attended Oxford and Sheffield universities, worked in library and cultural services and events management and now lives in Kent. His work has been published widely both at home and abroad and translated into several languages.

This collection of poems is divided into four distinct sections covering family history, childhood and adolescence and married life. Part of the book is set in Liverpool and part in Kent. Given the emphasis on family history, it is fitting that Curtis should dedicate this volume to his family. A series of endnotes written in the form of a brief autobiography help to fill out events described in the poems, whose short sentences sometimes require a fuller explanation.

The cover art by Mark Holihan shows how much this volume is grounded in place and family history. Churches are the traditional places where we celebrate and commemorate births, marriages and deaths. These are the thresholds whose seminal moments define the course of our lives. Looking over the threshold, the porch in the picture offers us a view of open countryside that could, indeed, be Kent.

The first section, ‘Familial’ is an exploration of his ancestral history that is at times both surprising and disturbing as Curtis attempts to get as near as he can to the truth of what happened in the past. Here we read of relatives killed in the first world war just before Armistice Day, of a brother who died as a result of an explosion of live shell casings packed by a batman into his lieutenant’s luggage, a favourite uncle who shared his cigarettes and whisky with his nephew after school, and a father who ran away from home and enlisted as a soldier at the tender age of 15, fearing he had killed his elder brother with a blow to the head. These personal poems will resonate with many readers, given the current revival of interest in genealogy and our fascination with the past.

‘Twelve’ is a sequence of 24 poems of 12 lines each giving an account of the writer’s childhood living in a street of council houses and prefabs in West Derby, Liverpool 12. These fast-paced poems pay homage to the icons of the age: Dinky toys, lead soldiers, Dan Dare, Lucky Dips, Elvis Presley and Radio Luxembourg, the “station of the stars”. We read of Sunday swimming lessons at the Dovecot baths, attempts at playing cricket in a wall-to-wall barrel-vaulted alley, street games such as skipping and hopscotch, car spotting, cowboys and Indians and hide and seek. Although these are personal poems, they succeed in being much more than that because they capture emotions and experiences that we can all identify with.

The third section, ‘On Patrol’, is an account of the writer’s adolescence growing up in another part of Liverpool. Every so often we catch glimpses of city life: everything from “breakfast beers in a market porter’s pub” to “church hall Scripture Knowledge” and an encounter with street violence in Liverpool 1.  The domestic scene is accurately portrayed and, at times, not without a touch of humour:

I shiver in the yard, decide

see-through Izal may be

great for tracing but

twined on the toilet door.

In ‘Don’t Know They’re Born’, the excitement of being left behind the wheel of his father’s car while his father has a drink in a pub marks the start of Curtis’ adolescence. Later poems in the sequence hint at a growing awareness of the wider world: the Mersey estuary, “the midnight steam packet on the Irish Sea” and the development of a wanderlust for far-off places:

In the final section, ‘Here Now’, Curtis presents us with a calendar of poems following the months of the year. The pace is notably more relaxed and in keeping with the change of location from an urban to a rural setting. Here there is time to stand still. In ‘Halted’ Curtis describes the sheer beauty of the captured moment as this series of poems reflects on the different moods of the countryside, its weather and the changing seasons. It is a far cry from Liverpool 12 and a fitting conclusion to a journey that Curtis has allowed us to follow in this well-structured book, which is as much about a journey through people as it is about landscape.