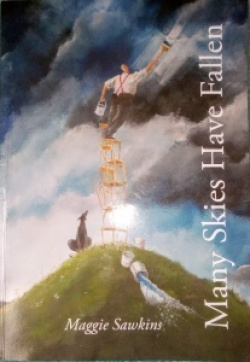 This collection contains lyrical and evocative poems that were written as a response to the death of a young man who drowned in Ireland’s river Shannon. Janusz Jasicki was the partner of the daughter of Maggie Sawkins.

Previously Sawkins has written about another daughter, a sequence of poems about drug addiction that won the Ted Hughes award. This collection includes a foreword from Maggie’s bereaved daughter Cat about her “young, funny, easy going, loveable rogue with a heart of gold”.

With the prose-poem ‘Corryolus’ is a quote from DH Lawrence: “We’ve got to live, no matter how many skies have fallen”, from which Sawkins has taken the title of this collection. It sketches the scene on the river on the eleventh day of the search for Janusz before concluding: “A hand. Blue. Among the rushes. The sky falling.”

The refrain of the plaintive, plangent ‘Find Me’ makes it the kind of poem that could be read at a funeral: “On this the shortest day of winter,/ in the persistence of a seagull’s cry, find me.”  And there is a sense of stoical acceptance in ‘Abha na Sionainne (The River Shannon):

It’s in my nature

To catch the fallen –

To be haunted by the shadows

I have parted my heart

You cannot condemn me –

I will keep on running

mouth of the sea.

It is my calling.

The collection also includes poems about Sawkins’s wider Irish family, and its strange history. ‘Some Place Down the Road a Sorrow’ talks about a grandfather who left “half his brood behind” when he boarded the boat for New York, and never returned home. She links it with the family’s 11-day search for Janusz, and there is also an echo of the abandoned mushrooms in Derek Mahon’s ‘A Disused Shed in Co. Wexford’:

Janusz    the searched-for one

resurrected a picture    of St Patrick

from my grandfather’s derelict

covered in spores    as if

it had waited decades   for the fluke

There are mournful, spiritual poems such as ‘The Unfinisheds’, ‘In Good Time’ and ‘Remains’ that reflect on souls and on death. Other poems, such as ‘Landings’ and ‘At the Borders of Sleep’, have wild, ethereal qualities that enhance the tone of the collection. There are also poems that Sawkins has previously published and has included again because of their relevance. At least one, ‘The Drowners’, in which she personifies the sea, is remarkable and ominous in its prescience. Another, ‘As If I Could’, has been slightly altered, and dedicated to Cat.

There are poems here that the poet wishes she had never needed to write. But they are composed with craft, skill and imagination, even in the worst of times, and offer comfort, too. In response to a family tragedy, Maggie Sawkins has created art, and a lasting memorial.

All proceeds from the book are being donated to the Lough Ree Sub Aqua Club, whose members took part in the search for Janusz, along with the Civil Defence and the RNLI.

Well done, Maggie ... that's a terrific amount to have raised from sales of a poetry book.

Thank you Greg for taking the time to review Many Skies Have Fallen. 'A Disused Shed in Co. Wexford' is one of my favourite poems by the way. It's one you can read again and again.

I'll be going over to Ireland in June to present the Lough Ree Sub Aqua Club with a cheque for £1600 from sales of the book.