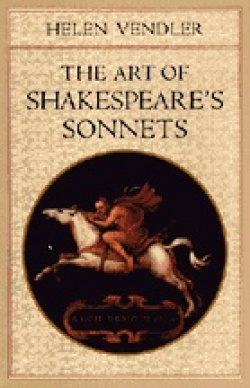 This book began as a pamphlet, of a 1990 Hilda Hulme Lecture entitled ‘Ways into Shakespeare’s Sonnets’.

It is a book of close-reading, a book that investigates poetry in depth, from its language, its craft. This is a handsome, and exemplary work.

Throughout, Helen Vendler has used the 1609 Quarto edition of the Sonnets. A facsimile of this edition is reproduced; the examination and commentary of each sonnet is then prefaced with a modernised version of the sonnet. The length, depth and volume of the commentary varies; at times she has gone into great detail examining a particular sonnet’s strictures and structures etc, at times she has written less. The last two sonnets she not commented on at all.

The Hardback version of this book contains a cd of Vendler reading selected sonnets.

She writes we must not look for a cogent philosophy, or autobiography, or historical parallels, in the Sonnets. Sonnets were the equivalent of well-turned pop songs; poems of emotional and emotive content. With the Sonnets we perhaps come across the Lennon and McCartney of sonnets, or perhaps the Dylan. Probably the former; that is, the traditional sonnet taken on further, into something more.

The Sonnets, consists of two thematic sequences; the first, from 1 to 126 Vendler calls the Young Man sequence, is followed by the Dark Lady sequence, sonnets 127 to 154. However, this does not prove that they were written sequentially, or in thematic order. She states that early, what she calls ‘trial pieces’, are scattered throughout the collection as a whole: sonnets 4, 6, 7, 9, 145, 153, and 154.

Of the Dark Lady sequence she makes the illuminating comment that they form “a proto-sketch for a drama rather like ‘Othello’, with its jealousy… sexuality… ambiguous “darkness”… and so on…”, whereas the Young Man sonnets are more ‘lyrical’ in the sense  that they “…allow(s) full exercise of the linguistic play… (that) embody(s) (the) structural mimesis…,”. The true ‘actors’ of lyric, as opposed to drama, are the words, ‘And the drama of any lyric is constituted by the successive entrances of new sets of words, a new stylistic arrangement… visibly in conflict with the previous arrangement…’. ‘Othello’ was published in quarto in 1606, the Sonnets in 1609. The time of writing and preparation of the one coincides well with the preparation etc of the other. It is in the preparation of the Sonnets that the two sequences were first construed, she argues.

Sequence One, the Young Man sonnets, she writes, are  ‘…entirely an infatuation of the eye – which makes a fetish of the beloved’s countenance rather than his entire body – that gazing is this infatuation’s chief… form of intercourse.’ There was no consummation, it seems, if we are to read them for veracity.

Sequence Two, however, she reads as contradictory to that: ‘Shakespeare’s duty as a poet of the inner life was not to be fair to women but to be accurate in the representation of the feelings of his speaker.’

Early on she makes the case for a very clear distinction between the writer of the poems (Shakespeare) and the speaker of the poems: lyric poetry is, by necessity a spoken art.

In fact it is Shakespeare’s fabrication of the realness of the speaker that is one of the innovations of these poems. Shakespeare’s speaker is ‘… given “depth” of character in each individual sonnet by several compositional strategies…’ and she goes on to enumerate seven of these, giving an explication on each one.

When to the sessions of sweet silent thought

I summon up remembrance of things past,

I sigh the lack of many a thing I sought,

And with old woes new wail my dear time’s waste;

Then can I drown an eye (unused to flow)

And moan th’expense of many a vanished sight.

Then can I grieve at grievances foregone,

And heavily from woe to woe tell o’er

Which I new pay as if not paid before.

But if the while I think on thee (dear friend)

All losses are restored, and sorrows end.

Her commentary is very informative here. The sonnet, she writes, ‘… takes pains to construct a speaker possessing a multilayered self, receding through panels of time…: “now”, “recently”, “before that”, “yet further back”, “the remote past”. She plots these out on a table thus: Habitual present; ‘Time of stoicism’; ‘Time of loss’; ‘Happy time’; ‘Neutral time’, and then proceeds to justify this with apposite quotations from the poem.

One of her most interesting examinations of this poem is her following through of strings of word sounds that ‘sound out’ the argument, its turn, conclusion, and counter turn. Read down, and across:

She even posits, wittily, the coinage of a new verb (‘… given the Renaissance confusion of sigh and sight…’) : sigh, sight, sought. ‘A sigh is the eventual result of a sight sought.’

Sonnet 55, she suggests, is built around the key word ‘live’. There are many instances of sonnets built around, and building in, key words. In 55 this is the one word that appears in all four parts of the sonnet, but more importantly, the one word that carries the weight of meaning in each part. In each part, that is, except quatrain 3; we have in quatrain 1 out-LIVE , quatrain 2 LIV-ing , the couplet LIVE… but in quatrain 3 it occurs in ob-LIV-ion. This one word carries the whole crux of the sonnet: how can the beloved survive oblivion?

Helen Vendler successfully makes the argument for reading sonnet 116 as a sonnet of ‘dramatic refutation or rebuttal…’. This sonnet is generally taken as a classic case of affirmation (a kind of ‘Love Is…’ cartoon?). There are a number of such rebuttal sonnets in the collection, it is one of the threads that runs throughout the collection (cf. Sonnet 18, Shall I compare thee to summer’s day?/ Thou art more…; Sonnet 130, My mistress’ eyes are nothing like the sun… etc etc).

Let me not to the marriage of true minds

Admit impediments; love is not love

Which alters when it alteration finds,

Or bends with the remover to remove.

O no, it is an ever fixed mark

That looks on tempests and is never shaken;

It is the star to every wand’ring bark,

Whose worth’s unknown, although his heighth be taken.

Love’s not Time’s fool, though rosy lips and cheeks

Within his bending sickle’s compass come;

Love alters not with his brief hours and weeks,

But bears it out even to the edge of doom.

If this be error and upon me proved,

I never writ, nor no man ever loved.

She says of the sonnet: “… there are too many no’s and nor’s, never’s and not’s… The  prevalence of negatives suggests that this poem is not a definition, but rather a rebuttal – and all rebuttals encapsulate the argument they refute.”

The “iambic prosody” of the sonnet belies the general reading: this sonnet’s meaning is emphasised by that ‘me’ in the first line: ‘Let me not to the marriage…’.

Vendler argues that the speaker in 116 is responding to certain arguments, or rationalisations. In this case, that of the Young Man, for a more ‘open’ relationship than the one already assumed by the speaker.

With quatrain 1 we have the mimicking of the argument and it’s outright rebuttal. Quatrain 2 asserts an alternative stance to that of the other person; quatrain 3, states Vendler, ‘is not simply a rhetorical restating of the those two threatening words alter and bend… The words are now unpacked in their full significance as they are reinscribed….’. Quatrain 3, in fact, takes on the other’s stance where before this position had been fought off/away; the speaker has now to admit the other’s stance and argue on his terms. This is in a sense a backing off/fearing to offend. It can be read as a plea, to bear(s) it out, but together. The couplet’s tone is more conceding in its self-turned criticisms, its broken rhythms.

It is surprising, and chastening, to learn, as here, just how much needs to go into a poem, into its structure; how its structure is in fact a part of the sense of the thing, and how the sound of words, part-words, can clinch an effect on the listener. A poem is indeed as much a physical artefact as a subjective, metaphysical, event.

The Art of Shakespeare’s Sonnets by Helen Vendler

Prosody - where language and music collide ►