A win's a win - Bolton Howcroft 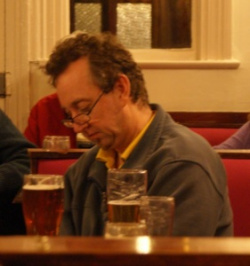 Well, I was picking the bones out of ‘Ancrene Wisse’, a 13th century masterpiece of Middle English prose - but what the hell - let’s talk about proper words and stuff innit.

I’ve not travelled to The Howcroft for several months. A combination of inclement weather and that over familiarity that breeds many things - not least - an embryonic contempt. Not for what the evening represents - but for the event’s venue and its unaccommodating ‘regulars’. Those plebeians that stand hunched at the bar feeding a hungry and marginally tuneful jukebox until the Tony Christie wannabe’s have sang themselves hoarse. But that was then - surely things had changed?

The non-poet cliental comprised of two Vimto drinkers and a mandatory bar-fly sitting with one of his chins resting on the bar. The ticking from Bolton’s nearby Town Hall clock could clearly be heard over the hum of enthusiasm - but this wasn’t the poetry event. This was the room where emotion was constantly stifled; where expression was fettered with ropes of negative poetry prejudice - and it was practically empty. Things were looking up.

Passing through into what was once a furnished room, where poets had so often whispered, recited and performed their words, brought with it a feeling of nostalgia. It’s nearly four years since I first ‘performed’ at The Howcroft, and although I can’t recall what people said to me - or HOW they said it - I can remember just how they made me feel. Which is why I now found myself standing in a room that could double as a squash court - it’s THAT sparse. Whoever is systematically removing the room’s furniture piece by piece - please have a heart and return it! Some windows are now without their infamous mustard coloured curtains - at this rate come Easter, we’ll be sitting on bean-bags.

What’s that saying? Nostalgia - it’s not what it used to be. Well, Alan Gray has shed the skin of Gordon Zola but he maintains a level of cheesiness that would grate on lesser individuals, but Alan’s humour is inoffensive, occasionally topical and always entertaining. As the event’s Comperé he was responsible for making sure the likes of Ego and Id were kept in check and that everyone who attended had a fair amount of time to impress - and impress they did.

Rob Goodier treats his rhymes like you would the last pair of fashionable looking shoes remaining in a shop - you’d suffer the pain as you horn a size 8 shoe onto a size 11 foot. They may make you wince occasionally, and a part of your anatomy may be potentially scarred for life, but what the hell - they look great - until they start to squeak - and they will - like Rob’s poetry did - but what I enjoy about Rob is that he’s a naturally entertaining guy. I don’t think he realises just how funny he could be?

I’ve seen Terry Caffrey out and about across the poetry scene and throughout the North West. He has a distinct style that exaggerates his Liverpool dialect and there is a depth to his poetry that needs to be listened to so that it can be appreciated fully. He’s actions are animated and brash - yet his words provide the ideal foil for his synthetic anger and acute observations.

Don Parry is one piece of furniture who hasn’t been removed from The Howcroft over the years. He’s as regular as a Swiss-clock (without the Cuckoo) as he entertains us all with his monologues, his music and his overall level of unmedicated enthusiasm.

Simon Ellis told us that as far as love and relationships are concerned he ‘don’t understand’. Well Simon, you’ve never had an ex-wife bustin’ your buns with ridiculous demands, and all the fall out which that entails - believe me - YOU understand more than most. A wonderful performance - perhaps one of THE main highlights of the night for me personally.

Eric Tomlinson blew sausage balloons to the brim with full rhymes before letting them flap around the room with those screeching high pitched shrills of metre and rhythm - for the puritan it was a celebration of pure, unadulterated poetry. For any fan of something more contemporary - the weight of full rhymes may have lay a little heavy on their stomach. Yet Eric is another regular. Come hail or shine he supports the Howcroft and that should be more than commended with just a few lines.

Val Cook, fresh from her antipodean exploits, unselfishly read a poem blowing a northern hemisphere sunshine up the Ayres Rock of regular Write Out Louders. She embarrassed a few of us with her unsolicited accolades and massaged the tired aching lexicons of those of us foolish enough to write poetry. It was a nice gesture - and that’s when it hit me.

In the time that I’ve been attending the Write Out Loud events, I’ve seen people come - and I’ve seen some people go, but it’s really quite bizarre to think that this group of people had nothing in common other than their love of poetry and/or the spoken word. Some still haven’t. The force that keeps everyone in the same orbit, as it were, is weaker with some than it is with others but that umbilical attachment made up of words, and a love of words and language will never really be severed. Poets are often a crazy, unpredictable, over sensitive, bunch of individuals - put them all together and you never know just what you’re going to get?

Last night was a great night. It didn’t have all the trappings that arrive with the razzamatazz and glitter ball twins. It had that good wholesome feeling. That old fashioned entertainment factor. The type of entertainment that today is so often scoffed at by the many who ‘just don’t get it’.

Dermot Glennon gets it. Gus Johnson gets it. Julian Jordan. Paul Blackburn. The list goes on. I get it. I very nearly forgot that I did, but last night brought something back into focus.

Jane and her daughter Jenny - they get it. Jenny is perhaps too young to understand the great responsibility that comes with ‘getting it’ but I’m sure, just like the rest of us, she’ll suffer for her art - whether that’s with her singing or with her poetry or both.

Linda Morgan, Janet Ramsden, Rachel Bond and Isobel each contributed to a great night while Jefferama made and distributed the cheese sandwiches straight into my fat face, as well as performing some subtle almost melancholic work - which was a pleasant change from Jeffo’.

At the end of the night - any remaining room furniture was auctioned off and all the proceeds are to be used to buy Alan Gray a new joke book. Although his ‘I’ll go for the Juggler’ as an introduction to Winston Plowes was an award winning line to marry with Winston’s award winning poem. A poem that recently won first prize in a categorised writing competition - a category Winston mistakenly submitted into the… under 8’s section.