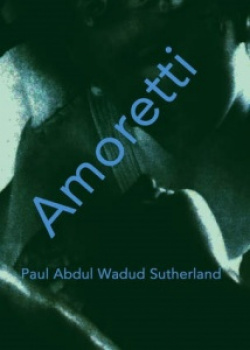 It was the title that drew me: Amoretti, the name of a sequence of sonnets written by Edmund Spenser to the woman who would become his second wife. It was published, like so many other sonnet sequences, at the end of the 16th century.

The author of this collection is Paul Abdul Wadud Sutherland, a poet unknown to me though he has published quite a few collections, the earliest dating from 1970; so an experienced writer referencing a much earlier poet. What is not to like?

The book consists of 44 short, 12-line poems, each poem a group of four haiku. Sutherland is pretty constant in the classical syllable count and occasionally you will hear what is, to my ear,  the essence of the form:

Yearning for you far away

That is so brilliant  - the way the tension of the yearning leads in to the cloud part-obscuring the moon. The final line operates like the sestet in the sonnet form, changing the perspective, suggesting more than it is saying. A later poems has this:

Are rarely a sound scaffold

What vertiginous shakes you get, delivered with such sharp economy. I love the way the tremulous is paralleled by the dizzy; “love’s dizzy works” looks like the best line in the collection with its combination of elation and dismay. We have all, surely, been there. The T-shirt has been acquired.

However, successes like those are comparative rarities. More often there is banality or incomprehension. Quotations out of context can be unfair because the force of a haiku can come from its positioning in the poem. But how about:

Then, through gusts of doubt

That spilled the wax, the self-gods

The gusts seem to come out of nowhere – though it does echo “thrust” from an earlier stanza. The spilled wax likewise. I do not know what the self-god is, or indeed the love-appeal. It all seems a bit random. Think of what Ezra Pound says about expressions like “dim lands of peace”. It dulls the image. It mixes an abstraction with the concrete. It comes from the writer’s not realising that the natural object is always the adequate symbol. Ezra Pound of course knew a thing or two about haiku.

As I read on in the collection, I began to wonder whether the choice of haiku was the right one for this sequence, which charts the various mood swings of a troubled love affair. The poet has to keep tight hold of his syllables. It all seems a bit clipped and terse. This in turn leads to many grammatically ambiguous phrases. Try this one:

How do you – could you - strip a tense? How can a tense be finer or less fine? Do these quarrels wreck feelings so that they are prevented from healing or are they going to heal anyway? It’s all very tight in that 5-7-5 structure and the poet does not have space to expand and clarify - and so the reader, or this one at least, is left floundering.

So, I  found this a not-altogether satisfying read illuminated by occasional flashes of brilliance. To coin a phrase, the moon was wrestling with the cloud - and for me at least, the cloud won.

Terence Jones is the chair of Ver Poets in St Albans. His poems have won a number of prizes, and he has judged  several poetry competitions.