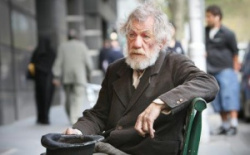 He was a bit-part actor, he never dreamt of commanding his stage

He signed on as a walk-on character, a cameo role in a one-off play,

Each night he learnt his lines, the same words he would speak every day

Rehearsing his part word-perfect, in the hope that his public would pay

No one spelled out his name in neon, the only stars he knew were in the night sky

His costume was never ironed, his make-up was faded and shallow

The look in his eyes told you everything, everything that you needed to know

In the wings he would stand, with no prop in his hand; but he was ready for the big show

He’d never been to RADA, his training was much harder than that

As a comic, he was awful, and his tragedy was beyond a joke

But then the curtain fell for the interval, and the crowd left for a drink and a smoke

He knew that was his cue, he knew just what to do; pull yourself together, don’t choke

As they filled their lungs and their stomachs, all he dreamt of was filling a bed

From the dark shadows he entered, a tortured Othello blackened with pain

This was his waited for moment, he spoke softly and crossed centre stage

But he they despised, and they averted their eyes, again, again and again

The fake injustice that entertained them, was the inequality of his real life

And the irony of their acting, their blind ignorance to his dreadful plight

Must surely have left him wondering, how they can see, and yet have no sight

Thanks Don, this is one of my favourites and works in so many things that influence me.