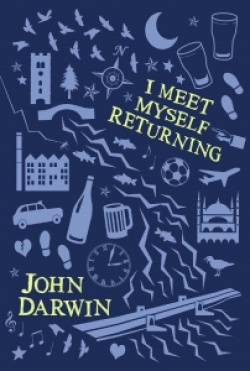 I first met and heard John Darwin at a Write Out Loud night in Hebden Bridge in 2010, and knew at once that he was an accomplished and interesting poet. Since then he has been the organiser at Write Out Loud Sale, a member of A Firm of Poets, and now co-hosts Spoken Weird in Halifax. I Meet Myself Returning is his debut collection.

It’s described as a “poetic journey from the mills and moors of the industrial north to the meals and mosques of the Byzantine middle-east and back again”. Just when you feel you’ve had enough of the wet north-west, in poems like ‘Dreich’ (“The darkest dreich of dankest hills, / the misery of disused mills”), you’re transported to the streets, bars and bridges of Istanbul, Darwin’s second home. Yet in a sense there is no escape. Darwin’s world-view remains bleak in ‘Dawn in Galata’:

Seagulls squawk as if to mock us

trudging up bleak hills to work,

for the drudgery we suffer

that they don’t find on the wing

In ‘The tissue seller’ the poet observes the cosmopolitan side of Turkey’s huge gateway between east and west:

The mosque is in repair again,

the locals line the Starbucks’ walls

Back to ‘Manchester, my winter’, and the same weary outlook: “He won’t know and she won’t know / but we know where this thing will go”. Those two lines have the facility of song lyrics, and Darwin compares the glamour of a music hero like Bruce Springsteen and his song of escape, with his own more circumscribed, Mancunian circumstances, in the collection’s title poem:

I emerge from the ginnel at the top of the street,

fake the motion of a screen swinging shut,

There are other rueful musical references. In a poem that has as its final line, “Only girls and football break your heart”, Darwin notes the north-west of England’s proud link to one of Paul Simon’s most famous songs: “I long to be in a song by Simon and Garfunkel, / smoking, reading magazines on trains / in romantic isolation, dreaming of Anne Bancroft / as they harmonise on Widnes Station.” (‘Football and girls’).

There are bleak but realistic views of fellow Brits abroad (‘And not a word of Spanish’) and closer to home (‘Number 22’). Darwin is more wistful in recording the briefest of encounters on a train (‘The sadness of strangers just passing’). In these poems, always composed in a confident rhythm, the dreamer is aching to break free, but cannot. However, there are always escape routes of a sort to be found, if only by downing a few pints of beer (‘The ale glass’). The first poem of the collection (‘Happy New Year’) is about drinking; the consolatory final line of the book is “It’s opening time.” (‘Listening to Sinatra’).

If you see black clouds looming, seek shelter in the pub. Maybe it’s all to do with Manchester’s weather. The realist jousts with the romantic in John Darwin’s assured if occasionally self-deprecating poetry; regular outbreaks of rain, interspersed with welcome moments of sunshine.