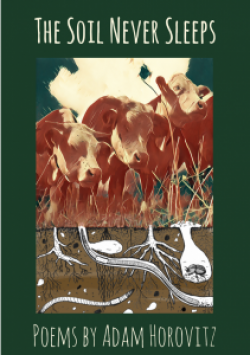 How much use is a poet down on the farm? Adam Horovitz was invited by the Pasture-led Livestock Association to be their poet in residence for a year, which involved staying on four of their farms – in the Yorkshire Dales, Cornwall, Kent and Wales – over the four seasons.

Horovitz is no townie – he grew up in Laurie Lee’s Slad valley, and has written a memoir, A Thousand Laurie Lees, about that landscape. But knowing the countryside does not mean that you are immediately adept as a farm hand. And his revelation that he is a lifelong vegetarian caused some astonishment at the kitchen table at Woodland Valley farm, Ladock, near Truro: “You can’t escape eating meat / on a pasture farm, Felicity says. It’s / almost as natural as breathing.” (‘Suppertime’)

He is roped in for various jobs, such as moving electric fences to allow the cattle to crop fresh pasture during springtime in Cornwall. His concentration slips:

New to this and bored of standing.

Tighten up, Adam, or they’ll escape!

This call from the far corner

Of the field is carried in too late

On a tensile breeze.

One cow bounds over, then another,

Then one more before the wire

is taut enough to put the others off.

Ah damn, says Chris as I hide my phone

And he scrabbles for his.

Horovitz’s frankness about his failings is disarming. On Romshed farm at Underriver in Kent, a calf is named after him. It always seems to be getting into scrapes, and its name morphs seamlessly into “Bloody Adam”, which the poet records “with foolish pride”. But at least part of the point about him being there is to get across the association’s messages about its land practices.  ‘It Came To Us Compacted’ is about a hay field, bought at auction, and what needs to be done, and not done, to get it back into shape. This lesson in soil management may not sound interesting, but it is. And the poem’s conclusion I find lyrical:

We walk the field, its permanent crop built high

beneath damp May sun. The turf’s been slit

to let more air and water in. In the caravan,

get ready for the steady growth of married life.

A whisper of rain through trees. The soil does the same.

At Hill Top farm at Malham in Yorkshire, ‘The Family Farm’ discusses the practice of feeding animals on pasture rather than on grain:

to win the odd prize at Malham show,

bulk animals up to winning weight

with grain. Now the animals

roam as they were meant to,

only brought inside when sick.

They don’t take so much weight

out on the hills, but it’s better

for them. Better meat, without

chemicals dripped into the chains

of food and wildlife.

But it’s certainly not a bucolic idyll on these four farms. Horovitz joins the ‘Maggot Patrol’, inspecting sheep’s backsides where flies may have landed and laid eggs “in deep nests of shit-encrusted wool”. In a long poem called ‘Walking the Bounds’, set during winter at Malham, he comes across a dead sheep, with a crow sipping blood from its eye. The economic purpose of life – and death - on these farms is emphasised when a runaway bullock cheats death for just a week in ‘Death and the Market’.

Some will argue that if humanity is to have a future on this planet, one way to save us would be to stop eating meat altogether.  Even if you don’t agree with that theory, it is fair to say that this book may not particularly appeal to vegetarians or vegans.

But Horovitz seeks to address a number of issues and to pass on what he has learned during his year on the farms in his long, powerful poem ‘The Abattoir’ (“A vegetarian?, he says. / What the dickens brought you here? “). The poet talks about the soil – “We are born of compost” – and “the measure of kindness” to be found “when farmers deal with death”:

It is not enough to say that ‘it tastes good’.

What does it taste of? Cheap cane sugar

and reconstituted fat, or the depth and breadth

of a certain field, ripe at high pasture,

where the farmer’s ploughed nothing, or just

pricked the soil to let more water in?

The poems also discusses how industrial farming practices change landscapes, sow seeds of destruction:  “If we /whisk up soups in chemical vats to tame the weeds,/ we strip the landscape of its language./  Maker a bowl in which to harvest storms.” At the end of his year Horovitz has not been converted into a carnivore:

Don’t write anything bad about us.

I assure him that I can’t. I cannot,

even now, removed from that place,

determined as ever not to eat meat.

Horovitz explains in his foreword to the book:  “What makes these farms different is their decision not to conform to the post-World War Two chemical-driven farming consensus that has seen soil and food stripped of nutrients, and animal welfare suffer, in the name of remorseless productivity. Their commitment is to raise ruminant animals wholly on pasture, under the PfLA’s banner of ‘Pasture for Life’, with the attendant benefits to the animals, to the environment and to humanity that a holistic, nurturing approach to farming allows.“

John Clare would, I am sure, have approved of many aspects of this book. Horovitz has given us a perceptive, honest and often lyrical account of the land and animal husbandry and human relationships that he has witnessed and been involved in, in a generous narrative of poems stretching over more than 120 pages of a fascinating book. As a poet-in-residence he has done all that could have been asked of him, and then some.  Buy this book, and you will find yourself with the poet out on the hills, rescuing animals caught in brambles, and coming across other, dead ones, and maybe empathising with his observation:

A coldness settles in me. Not sorrow as such; more

my veins rebuilt as walls, learning the need for stone.