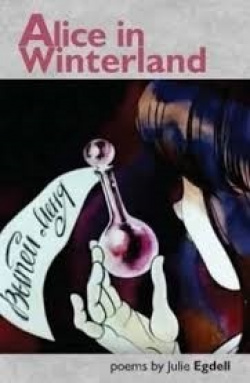 My favourite version of Lewis Carroll’s best known work, the psychedelic fairytale ‘Alice’s Adventures in Wonderland’ is not the slightly saccharine (but still endlessly strange) Disney version, nor the more recent Tim Burton non-event which seemed to appeal to people who had never read the book. Nor is it the book itself, which I have enjoyed each time I have read it. For me, it is the warped, surreal ‘Alice’ by Jan Švankmajer, a film made in 1988.

I mention this because I feel like I have stumbled upon its spiritual sibling in the form of Julie Egdell’s wonderful collection Alice in Winterland, a sequence of poems that evokes both the fantastical adventure of the original text and the bleak, stark outlook of Švankmajer’s disturbing vision. It helps of course, that they both move Carroll’s story to colder, harsher climates. Egdell, who grew up in Whitley Bay and then went to work in St Petersburg, uses the framework of the tale to transport us to post-Soviet Russia, evoking the disturbing loneliness and heartbreak of being in a foreign land, its weight pressing against you.

The imagery present in these small, frail poems is staggering at times. Egdell keeps her lines short for the most part, utilising punchy brevity which I felt suited the words perfectly. The opener, ‘Alisa versus Stranye Chudes’, sets the scene perfectly and contains many of the best lines in the first half of the book:

Now I wear the rabbit

Here we have arrival, a new world, one of ‘Soviet donuts’ and ‘Deformed foetuses pickled in vodka’. Throughout, Egdell winds the fantastical with the mundane, the surreal with the shocking. She uses traditional Russian folklore such as the Baba Yaga alongside her own memories and, of course, the story of Alice itself, to describe her isolation, a foreigner in as strange a land as you can imagine.

In ‘The Caterpillar’s Worm Work’ she describes the gradual decay of a small town through the eyes of someone content to watch it burn:

The centrepiece of the entire collection is, for me, the epic ‘Mad Hatters Tea Party’. Edgell lifts lines directly from the Carroll chapter of the same name, winding them alongside and between her own piercing recollections, of fathers and lovers and "vodka made in the bathtub".

‘Alice in Winterland’ is best digested as one, a slippery and at times nightmarish tale. The collection is held together well by a central story and Edgell allows her characters to breathe and live in these well written, timeless poems. I was surprised to read, on the back of the book, that this was her first full collection. It is written with a confidence and assurance that belies this fact and I would recommend it to anyone who enjoys the transportive power of words.

◄ 'What if I just sat there? she asks. It's a free country, I tell her'

Thanks Stu. Intrigued to read it now. John