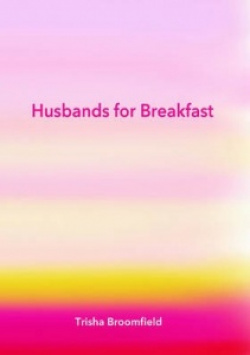 Trisha Broomfield was born in Lincolnshire, grew up in Australia and now lives in Surrey.  As well as poetry, she’s a writer of short stories and unfinished crime novels. Husbands for Breakfast is her second collection.  She cites Thomas Hardy, Ted Hughes and the Liverpool Poets as her influences.

The poems in this collection derive very directly from women’s experiences; of growing up, sex, marriage and getting older – in the 1950s and the 1970s. They are often painful: unsatisfactory one-night stands; unplanned pregnancy; domestic violence; strippers; marital infidelity, and death in old age. So when a child describes “our very own policeman” who keeps us safe (her mother says), we find him halfway through the poem following her mother “up the squeaky stairs”. At this point the child and her sister “knew it was time” to get out their crayon tin and draw “waxy pictures” of robbers in stripey T-shirts.  They carry on drawing until “Mum reappeared with apple cheeks”. The crayon tin and the waxy pictures make this story persuasive, planting the event firmly in a particular period. I’m sure there was a 1953 Coronation picture on the tin and I can hear the dull rattle of wax crayons inside. No plastic wallet of felt tips.

This attention to period detail does haul some bleak experiences back to life. The woman dancing semi-naked in the pub, for men who had “more important things on their mind”, mouths “Mouldy Old Dough” as she twirls. This weirdly unforgettable song neatly authenticates the moment – though in the end this scene is all too familiar and did leave me wanting another layer to the poem.

Carefully-located memories of voices and words also trigger more amusing accounts: Auntie Vi who got so thirsty while shopping that she “couldn’t spit sixpence”; Steph (known as “Stiff”) whose Bouvier des Flandres dog was known by the children as a Bois de Boulogne, because after all it was “sideboard big” and “blocked out the sun”.  I enjoyed these distinctive phrases, her parents’ castigation of “Bea” who was “black as your hat”, “fat as a cat”, who “ate husbands for breakfast”. They anchor the poems for the reader, as they must have for the poet herself.

So there is humour along the way and sometimes the surprise of trust between the sexes; when a young man takes a girl outside during a party to attempt sex against a wall, he discovers she is 15 and a virgin. So he “leads her back to the lights”, “and that, my grandmother said, her eyes black buttons/in her bright face, was how I knew your grandfather was, the one.”  A teenage spirit of adventure also shines through, as in ‘Grey as the Sligo Sky’ which takes us through Ireland with “Daph and I”. The poem is typical of Broomfield’s work in its concern with the specifics; what the girls pack is “paper knickers, powdered milk, and teabags”.  Of course. And in the wholesome “green and brown” of the landscape, the reader sees how “our black eye-pencil smudged/and blisters blossomed in our/desert boots.”

Naivety, fun and making-do also shine through in ‘Painterly’ where two art students agree to paint their lodgings if the landlord pays. We half see the dénouement as the poem takes us room by room through the “shriek of shades” the young women have chosen. Then the landlord arrives:

But … I thought you’d use Magnolia

Along with her sharp eye for detail, it is Trisha Broomfield’s economy with words and her well-chosen line breaks that lodge these glimpses into women’s lives in the reader’s mind. A good example here is ‘Safe as a Peanut in a Tree’, where two sisters are allowed to use their father’s airgun to shoot the peanut tin targets he set up for them in the laburnum. It showed me not only an unusual relationship between a father and his daughters, but through the poems’s tersely downbeat humour, gave me a taste of how the family interacted. Clutching the airgun “like Kojak”, another well-placed temporal landmark, the sisters appear, crouched by the dustbin:

letting the peanut tins have

even though the gun

and the peanut tins

were safe as houses.

If these are poems that tell it like it is, the women we meet are knowing, resilient and, from the tone of this writing, funny.