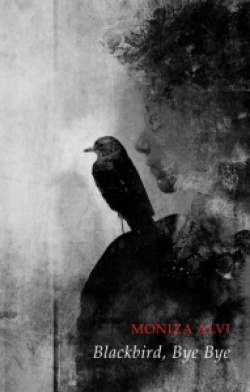 Moniza Alvi was born in Pakistan and grew up in Hertfordshire. After working for many years as a secondary school teacher in London, she is now a freelance writer and tutor, and lives in Wymondham, Norfolk. She has been shortlisted three times for the TS Eliot prize.

Birds become a metaphor for the family in her 2018 collection, Blackbird, Bye Bye, her first new poetry book since her TS Eliot Prize-shortlisted collection At the Time of Partition, published in 2013. The layout of many poems is skilfully deployed to emulate travel, freedom and flight. Line spacing replicates the lightness and freedom of birds. Yet these poems are deceptively light ; for we are invited to read between the lines, piece together the hints and details that suggest  darker aspects of familial relationships.  Yet the conceit of the ‘Motherbird’ and ‘Fatherbird’, the aerial language, the free spacing serves to take us away from a typical bleak, unremitting family study, to something subtler. Yes, we must put the clues together but just when the truth becomes too much, the lightness of the style lifts us above the misery memoir.

The collection is divided into sections: the mother figure is given the first section, the father the second, and then there is a final part. A family has moved to the UK from more exotic climes. There is is a sense of a yearning for the old country which is manifest in difficulty in adjusting to the new one. In the poem ‘The Coldest Winter’, the challenge is represented in the difference in weather. In ‘England! Bridlington Bay -’ the exclamation mark infers a sense of achievement or excitement, but may also imply great disappointment at the harsher realities signified in the cold weather. The dash suggests the parents’ dismay at encountering not just the weather, but a cold reception from the native’s population. This poem is divided into two stanzas and arranged upon the page in such a way as to replicate a bird’s wings, suggesting perhaps the parents’ desire to fly away home. Children would seem to be part of the family equation, so parents must chivvy with the words “It’s an opportunity for us”. The second stanza begins with the qualification “Then we can return,” presumably when fortunes have been made.

In ‘When Motherbird met Fatherbird’ there are further family complications. It is inferred that mother and father come from different classes or backgrounds, so their marriage is frowned upon in their homeland. “They’re from such different countries. It’s unnatural” reflects the chorus of disapproval the mother and father have encountered. Here the motif of birds works as a means of defiance, the couple fly in the face of their critics and make a go of a family. Moreover, they do not flee from their accusers; instead, in ‘Flew Back. And settled’ the couple’s defiance is shown in their retaliatory, firm “This is our home now”. There is no linear narrative here; information is given to the reader piecemeal. In this way the events of the poems can apply not just to the narrator’s parents but others in a similar situation, broadening from the specific to the universal.

Yet there are darker hints that the defiant love affair did not have a happy-ever-after. Here the conceit of the birds comes into its own. In the poem ‘Invisible’ it seems that the motherbird has been a victim of domestic violence. The opening line shocks, coming as it does after some gentler poems on the nature of motherhood; her bruises “can’t be seen beneath her soft feathers”. Domestic violence is often concealed by the victim out of shame. What also develops here is the truth that recognition of violence towards the mother results in a rapid maturing of the child. Although the mother chooses to forget or conceal her wounds, the child cannot: “I know they’re there.” This is an intimate poem revealing the closeness between mother and child. The bruises are described as “a mark of violent hues, one shade merging into another”. The word “merging” suggests a history of violence written in bruises, and this is perhaps the most revealing of all the poems, dealing with family truths head-on. What develops, as so often occurs in domestic violence, is a situation where the child takes on some of the guilt, finally stating “and I take on responsibility as if I caused it”, suggesting not just the demise of childhood innocence but that the child sees it as his/her responsibility to protect the mother, to try and prevent further violence.

The fatherbird himself is initially a hazy figure who seems often to be absent. In ‘A Photo of Fatherbird’ we piece together the image of a handsome but remote man who “perches just above life”. This suggests a sense of superiority to the everyday, a man who never quite finds the right occupation, who perhaps has delusions of grandeur which are indulged whilst the mother figure keeps the family going. The hints of violence surrounding him are reiterated in the line “stabs and stabs at the living world”, intimations of an ultimately disappointed man who takes that disappointment out on his family.

The father figure is doomed to remain remote to his children, and in the next section of the collection titled ‘The Afterlife of Fatherbird’, he is rendered more remote by the onset of dementia. Only after his death can the narrator develop a relationship of sorts with him. In these sequence of poems, the narrator reconciles the negative aspects of the parent they knew by mentally shifting back to better times, often before their birth, when the father was young and full of potential: “Dignity. Now you’re are dead you’re regaining it bit by bit.” The narrator adds: “I’m so relieved it’s reattaching itself to you.’

These poems deal with some serious subject matter that will resonate with many of us. The conceit of Motherbird and Fatherbird, the lightness of touch, gives us a fresh slant on how to deal with painful memories. The motifs of freedom and flight shows us that we can deal with these matters piecemeal and without being overwhelmed; they also suggest that it is possible to establish a relationship with parents on our own terms.

Fiona Sinclair is editor of the online poetry magazine from the edge. Her eightth collection, The Time Travellers' Picnic, will be published by Dempsey and Windle in March 2019. She lives in Kent with her husband and an imaginary dog .

◄ Welcome to a new voice at Write Out Loud: John Foggin, aka The Great Fogginzo

Knowing your place: locating the poetry of landscape ►