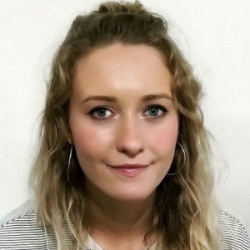 Molly Underwood has won this year’s £10,000 Manchester Poetry Prize, awarded for a portfolio of poems. Her win was revealed at a gala ceremony on Friday, February 1, in the Baronial Hall at Chetham’s library in Manchester.

She graduated with a degree in English from Queens’ College, Cambridge in 2014, and has spent most of her time travelling and working abroad since then, in Spain, Ireland and Vietnam. Last year she returned to the UK to complete a master’s degree in social and cultural theory. She is currently living and writing in London.

Adam O’Riordan, chair of the poetry prize judging panel and academic director of Manchester Writing School, said: “In a richly varied short list, Molly Underwood shows an undeniable musical clarity in her work. As few poets can, she reminded the judges of the reasons we began to write ourselves.”

“Manchester has recently been awarded international UNESCO City of Literature status. This achievement reflects one of my original aims in creating this competition – to establish our city, Manchester, as the focal point for a global literary celebration. So what better place for us to be presenting the UK’s biggest prizes for unpublished writing and to welcome a shortlist of writers from around the world.”

You can read all the poems shortlisted for the prize here

◄ 'All week, I ran a fever that wouldn't break'

Welcome to a new voice at Write Out Loud: John Foggin, aka The Great Fogginzo ►

Congrats dear Creative Poetess Molly .. you deserve it .. not only for that great and excellent achievement .. but for your pleasant and kind personality. I wish you many more awards.