Stories, blogs, stand-up, song: all part of the Spoken Worlds mix at the Pickle Pot 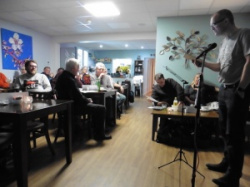 Emma Purshouse met Gary Carr over a cup of tea to discuss his regular poetry event, Spoken Worlds, which meets on the third Friday of each month, except December. Its current venue is the Pickle Pot in the village of Branston, on the outskirts of Burton-on-Trent.

What made you set up a spoken word night?

I had been to spoken word poetry nights in Derby. One was quite cliquey and not particularly beginner-friendly, the other was wonderful and run by an amazing poet called Simon French, but the venue put a stop to it.  Lacking a night to go to I was casting around for a venue. A local drama school was looking to use their place on Friday evenings, so we got together to put the first Spoken Worlds on in November 2009. It was initially a one-off to see if both the school and I were happy with it. I’ve had six venues in the nine years since, and I’ve had that initial arrangement with all of them, a one-off to see how it goes, so either side can back out easily at that point.

Your event has been running a long time. To what do you attribute your success?

I’m not sure how one defines success. I think that our longevity is down to a number of factors. One is that Burton is well placed, handy for the A38 – the Pickle Pot is only about two minutes drive from it – the A50/A511 and the A444. The M1 is only 15 minutes away. A second factor is that the environment is safe and supportive. We have a group of regulars who understand the need to support new readers. I always make a special effort to chat to newcomers, even if they’ve only come to watch.  I check that they’re enjoying themselves and often introduce them to people to chat to, if no one has introduced themselves already, which is rare. The third factor is the people who come. Because we don’t limit ourselves to poetry – storytelling, blog entries, stand-up, anything spoken, even a sung poem is welcome – we have a wide range of people and styles. Finally, I continued through a couple of spells where numbers were low. One of our venues in particular was very unforgiving with less than 20 in the room. There have been low points, but they’re worth weathering for the great nights when it really comes together.

What format does your night take?

We have three “halves”. My USP is that this is 50% more than anyone else. The two breaks are as long as I can make them, I like to allow people as much time to chat as possible – there have been collaborations and offers of work based on chat at Spoken Worlds. I love that about it. I also love the fact that it is one of the very few pure open mic spoken word nights. I have averaged less than one headline guest per year. As people arrive the put their name on our little whiteboard in the slots they want to perform in. They can perform up to three times, totalling not more than about 10 minutes, but I’m not over-strict on time if I can avoid it. I encourage three shorter sets, it keeps the event moving, gives it a dynamism and a flow that many events can’t match. We get about 40 short, snappy performances, rather than 15 or so longer ones.

If someone wanted to come along and was thinking of preparing something to share with your audience, what sort of thing goes down well?

Something to surprise us. Something different. One of the things that is rare, but has always gone down well is collaborative performance, particularly where someone comes along and chooses their cast from the audience. Honestly, though, we’re all there because we want to hear what other people are doing and let them see what we are. If you come along without preconceptions you’ll be welcome, whether you’re rapping, doing comedy or presenting a three-part concept piece based around Viking sagas (that hasn’t happened yet).

Would you encourage other people to set up spoken word nights if they don't currently have anything running in their own area?  And if so, can you give them some tips about the best way to go about it?

I would absolutely encourage people to do that. There are no hard and fast rules for format, layout, venue or anything really. Find a venue that you are comfortable in, a format you are happy with and if you’re going to MC your own event be welcoming and as much at ease as you can be. People recognise that, and are more at ease themselves. Invite people to the first event that you hope will set the tone, but expect (and allow) the event to find its own personality over time. Don’t worry, if it doesn’t work out you’ll have learned something. Oh, and make sure you don’t pick the same night as your nearest events - maximise everyone’s potential crowd and avoid friction.

People could check on the Write Out Loud Gig Guide to avoid clashes, of course.

What are the highlights of running a night?

The nights when it all works, when everyone is at their best, I leave on a real high. The one we did in November was like that. I like hearing about collaborations between people who met through the event, or paid work coming in. It’s great having someone turn up for their first reading either as audience or performer, and seeing people develop their skills in writing, their reading style and their confidence. Long term you just want to go “Yeaahh” quietly when you see it. Since moving to the village we have had a lot of local interest, with people just coming along and listening. We’ve become part of the community, something I never expected but that is really exciting.

How do you feel about paying performers?

When I started to run Spoken Worlds I had no contacts in the poetry world, I had only been to pure open mic events. I didn’t know paid performers were even a thing in the poetry world, outside of a few really big names in big cities. But we have had “name” poets call out of the blue and want to perform, the first was Russell Thompson (Rachel Pantechnicon), we’ve had Ash Dickinson and most recently Attila the Stockbroker. In that case I usually arrange for an honesty pot, pay what you think the night is worth.

Thanks for your time, Gary.  I hope the event continues to go from strength to strength.

◄ 'Prophecy, the warning of what yet's to break out' 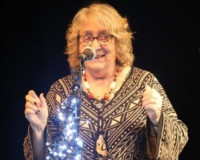 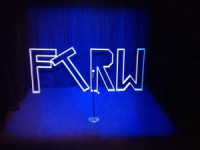